Thornbury is a market town and civil parish in South Gloucestershire, England, about 12 miles (19 km) north of Bristol, which had a population of 12,063 at the 2011 Census. It houses South Gloucestershire Council headquarters and is twinned with Bockenem in Germany. Thornbury is a Britain in Bloom award-winning town, with its own competition, Thornbury in Bloom. Suburbs include Morton and Thornbury Park. The civil parish also includes the hamlet of Milbury Heath.

There is evidence of human activity in the Thornbury area in the Neolithic and Bronze Ages, but evidence of the Roman presence is limited to the Thornbury hoard, of 11,460 Roman coins dating from AD 260–348, found in 2004 during the digging for a fishpond. The earliest documentary evidence of a village at "Thornbyrig" dates from the end of the 9th century. Domesday Book noted a manor of "Turneberie" belonging to William the Conqueror's consort, Matilda of Flanders, with 103 residents.

St Mary's Church, begun in the 12th century with later additions, is the oldest surviving building. The town charter was granted in 1252 by Richard de Clare, Earl of Gloucester and lord of the manor of Thornbury. The charter's 750th anniversary in 2002 was celebrated with a "750" flowerbed planted in Grovesend Road. The town grew around the site of its cattle market. Thornbury lost its status as a borough in 19th-century local government reforms, but in 1974 the parish council exercised its new right to designate itself a town council.

The ancient parish covered a large area extending to the River Severn, and included the detached area of Rangeworthy until 1866, when this became a separate civil parish. In 1894 the western part was detached to form the civil parish of Oldbury-on-Severn and the eastern part to create that of Falfield.

Thornbury Township, Pennsylvania, USA, founded in 1687, was named after Thornbury, Gloucestershire, by George Pearce, whose wife Ann came from there. In 1765 Dr John Fewster of Thornbury presented a paper to the Medical Society of London entitled "Cow pox and its ability to prevent smallpox". Fewster was a big influence on his friend and colleague Edward Jenner, the pioneer of vaccination.

Thornbury was once the terminus of a Midland Railway (later LMS) branch line from Yate on the Bristol to Gloucester main line, with intermediate stations at Iron Acton and Tytherington. It lost its passenger services in June 1944 but lived on as a goods route, also serving quarries at Tytherington. The site of Thornbury railway station and the line have been redeveloped into a supermarket, a housing estate, a bypass road and a long footpath. Further relics of the line can be seen at Tytherington Quarry to the east of the town. There are plans to reopen the line to Yate via Tytherington and Iron Acton and possibly restore services to Gloucester and Bristol.

Thornbury had a market held in the high street and the market hall. It moved to Rock Street in 1911 but closed in the late 1990s, being partly replaced by a smaller market in a car park near the United Reformed Church. The older site has been redeveloped as a community centre called "Turnberrie's"; the older community centre, at 'the Chantry' in Castle Street remains in active use. The old market hall is now a clothes shop.

Thornbury's coat of arms combines the arms of four families important to its history: Attwells, Howard, Clare and Stafford. John Attwells bequeathed £500 for the establishment of a free school that merged with the grammar school in 1879. The Attwells arms was later adopted as the badge for the grammar school. The other three families held the manor at Thornbury over several centuries, with the Latin motto Decus Sabrinae Vallis (Jewel of the Severn Vale). 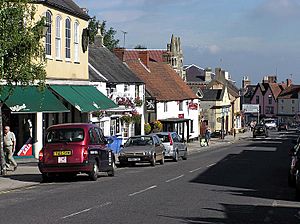 Thornbury High Street. On the left is the old market hall (now a clothes shop), the White Lion pub and a Tudor style house.

The many pubs in the town the White Lion in the high street, which won the Thornbury in Bloom award in 2003 and the Britain in Bloom award for Best Pub Display in 1999. Restaurants include one at Thornbury Castle, also Ronnie's of Thornbury, and the Indian restaurant Romy's Kitchen, with Romy Gill as chef and owner.

The shop front of the Wildings (formerly Worthington's) clothing shop was used in the Two Ronnies serial sketch, "The Worm That Turned." In urban legend it is proposed that Ronnie Barker got the idea for Open All Hours when he visited the local Riddiford's grocer's – however, Open All Hours ran from 1976, following a pilot in 1973, long before the filming and broadcast of "The Worm That Turned" in 1980. The nearby nuclear power station at Oldbury-on-Severn, Tytherington quarry and Stokefield Close were all used as locations for the 1976 four-part Doctor Who serial The Hand of Fear. The Castle School, Thornbury was used for an episode of Casualty broadcast on 2 May 2009.

There are a number of musical and drama groups performing in Thornbury. The largest venues are the Armstrong Hall near the town centre, seating 350, and the adjacent Cossham Hall, seating 140. Performances also take place in church halls and occasionally in the leisure centre. Some local amateur groups are:

One of the biggest firms on the industrial estate in the south of the town is Essilor, who manufactures spectacle lenses. The construction of the Midland Way has boosted industry by allowing traffic to avoid the steep and narrow B4061 road.

One of town's notable features is its castle, a Tudor structure begun in 1511 as a home for Edward Stafford, 3rd Duke of Buckingham. The two intricate redbrick chimneys, built in 1514, resemble those found at Hampton Court Palace. Cardinal Wolsey had the Duke killed for treason in 1521, after which the castle was confiscated by King Henry VIII, who himself stayed there for ten days in 1535 with Anne Boleyn.

Thornbury Castle fell into disrepair after the English Civil War, but was renovated in 1824 by the Howard Family. It now serves as a 27-room luxury hotel and restaurant.

Construction of the Anglican Church of Saint Mary the Virgin started in 1340, with major additions in 1500, 1848 and 1988. It remains in use for regular worship, baptisms, confirmations, marriages, funerals and remembrance services. It also hosts the local primary school (St Mary's CEVA Primary) for their seasonal celebrations, like Harvest, Christmas and Easter.

The town pump on a small island at the bottom of the High Street shows a hand pointing "To Gloucester". The original pump was removed in 1924 as a road hazard by the council. The new one built in 1984 was temporarily painted gold to celebrate the Golden Jubilee in 2002. It is usually adorned with flowers and birthday greetings.

A footpath called Streamside Walk starts at Gillingstool Primary School, passes over several roads and bridges, continues past Thornbury Hospital and Manorbrook Primary School, and on to the north of Thornbury, where the stream leaves the town. Another stream runs through the north east of Thornbury and merges at an old mill.

Although the station building is no more the old railway line serves as a footpath. It was laid out in the 1990s to support new housing and industrial developments, previously having been grassed over and neglected. Starting from the industrial estates it follows the route of the streets of Streamleaze and Avon Way, ending near a roundabout at the top of Avon Way.

Created by the Thornbury and District Heritage Trust as a Millennium project, the heritage trail encompasses the town's historic buildings. There are forty way-markers indicating the route, which starts outside the town hall.

Mundy Playing Fields were donated to Thornbury by Mrs Violet Mundy in 1937. They feature a children's play area and sports ground. Nearby are Thornbury Golf Club, Thornbury Leisure Centre, Thornbury Lawn Tennis Club and a skate park. In south Thornbury there is a small children's play area. There are green spaces around the town. A Thornbury community garden was set up near Gillingstool School, but has closed due to housing development. A replacement community garden will be built next to the new Community Centre.

Thornbury RFC play in the South West 1 League. Despite being a Thornbury club, their ground is located in Rockhampton, on the outskirts of the town.

Thornbury Town FC play in the Gloucestershire County League which is tier 11 in the English football league. They won their first league title in the 2009–10 season.

These include Filnore Woods, Armstrong and Cossham Halls and Thornbury Museum. A heritage trail offers information signs about places of interest, starting from the town hall (once the police station and magistrates' court). The MacLaine Memorial Fountain is dedicated to the memory of Lieutenant Hector MacLaine, a local man who helped protect the British in India from the Russians and Afghans in 1880. Thornbury has an antiquarian mathematics bookshop.

All content from Kiddle encyclopedia articles (including the article images and facts) can be freely used under Attribution-ShareAlike license, unless stated otherwise. Cite this article:
Thornbury, Gloucestershire Facts for Kids. Kiddle Encyclopedia.