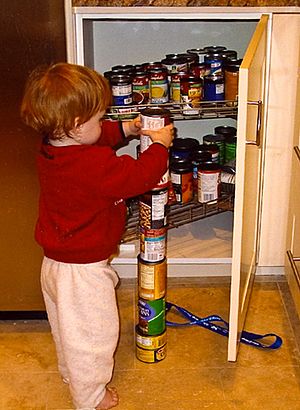 A boy with autism stacks up cans over and over again.

Autism, also called Autism Spectrum Disorder (ASD) describes a group of complex disorders of brain development such as Asperger’s Syndrome, Atypical Autism and Childhood Autism. ASD is a lifelong developmental condition that affects the way an individual relates to his or her environment and their interaction with other people. The word “spectrum” describes the range of difficulties that autistic people may experience and the degree to which they may be affected. The main areas of difficulty are in social interaction, verbal and nonverbal communication and restricted or repetitive behaviours and interests.

Autism is caused by the way that the brain develops, both before and after a baby is born. Around the world, about one in every 160 children has an Autism Spectrum Disorder. 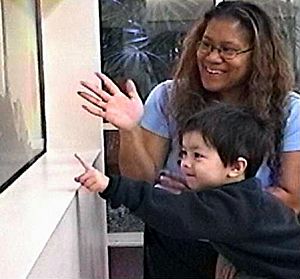 A three-year-old with autism points to fish in an aquarium, as part of an experiment on the effect of intensive shared-attention training on language development.

A baby without autism will usually be interested in other people. Autistic babies may like objects more than faces and other people. They may look for a second at a face, but quickly turn. They may not smile or may just smile at what they are interested in. Autistic children may usually like to be by themselves. They may not be interested in making friends. They may also not react normally to hugging and other signs of love by their parents. This does not mean that they do not love their parents, they just do not know how to say it. Often, it is difficult for them to know what other people think or feel. For example, they might not see much difference between whether a parent is smiling or feeling sad. They may laugh and cry at the wrong times. Some do not understand that someone else can have different thoughts and feelings than they do. This is a sign of a missing Theory of Mind.

An autistic child might not try to talk, point, or otherwise try to get a message across by one year of age. Some do not understand language at all. Those who speak usually do not show changes in pitch and tone. The voice sounds monotonic. But pitch and tone are important for communication. It helps to interpret the meaning of the words. Often, the use of homographs is difficult for people diagnosed with autism. Many autistic people have problems to understand gestures or facial expression. They seem to have only a limited amount of facial expressions. This makes it difficult to express themselves or understand the expressions of others. However, they may try to communicate using pictures in books, photos, signing or picture cards when they do not speak but have clear understanding of language. 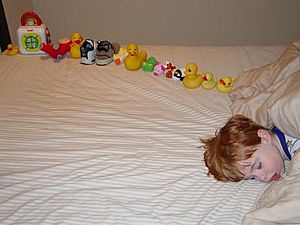 Some autistic people spend a lot of time doing the same thing over and over again like spinning in circles or putting things in order. Other typical behaviours are rocking, twisting and flapping. These behaviours do not serve as communication. They often last up to adulthood and may turn into obsessions or motor tics. Some autistic people may also be interested in unusual things, and may spend all of their time learning about their interests. Many autistic people do not want any change. They will do exactly the same things every day and may even get upset if anything changes. But some can tolerate a change in routine with forwarning.

When it comes to sound, autistic children are attracted to specific sounds from aeroplanes, the ticking of clocks and other mechanical sounds. Often autistic children notice sounds earlier than others do. But many appear to be deaf when it comes to the human voice. Background noises like music, conversations or the wind can be very distracting for them. Many autistic children make unusual sounds that seem to be comforting for them. It is often noticed that their loudness of speech is too soft, too loud or changing continuously between these two levels. This may show a changing comfortable listening level.

A lot of autistic children pay attention to detail. They can look at pictures or books for a very long time. Some are frequently found to gaze into space.

A few autistic children show very good balance skills. Some do not show any dizziness after spinning around for a long time.

Over the past years, individuals have been using the terms "autism" and "autism spectrum disorder" like they mean the same thing. Autism is a spectrum disorder. This means that some people who have autism are only mildly affected.

These people may go to regular schools, go to work, and have partners and families. Some people are affected worse than others. These people may be able to take care of most of their own needs at home like dressing and getting food, but not be able to have a regular job or travel alone.

A person who has severe autism may need to be cared for all their life.

Few people with autism are extraordinarily gifted or talented. These people are said to have savant syndrome. They are often very good at just one thing in particular, like mathematics, playing the piano or remembering football scores.

All content from Kiddle encyclopedia articles (including the article images and facts) can be freely used under Attribution-ShareAlike license, unless stated otherwise. Cite this article:
Autism Facts for Kids. Kiddle Encyclopedia.