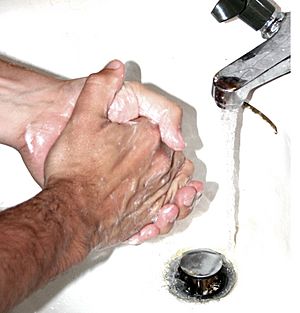 Frequent handwashing is a behaviour often seen with OCD patients

Obsessive–compulsive disorder (often shortened to OCD) is a mental disorder that causes repeated and unwanted thoughts and/or feelings (obsessions) and actions (compulsions).

Anxiety is one of the most common symptoms and can lead the individual to believe that if a task is not completed, something bad may happen. Such a task may be washing hands many times. This belief leads to more anxiety and tension. OCD affects around 1.2% of the world's population, and it affects the lives of around 15%. In the United States, about one in fifty adults has OCD.

Some examples of compulsion include:

All content from Kiddle encyclopedia articles (including the article images and facts) can be freely used under Attribution-ShareAlike license, unless stated otherwise. Cite this article:
Obsessive compulsive disorder Facts for Kids. Kiddle Encyclopedia.