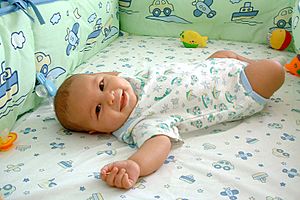 A baby is a very young human who is born when a mother gives birth. A baby is called a newborn for the first 1 to 3 months of life. They are then called a child until about the age of three years old, and a preschooler between 3 years old and school.

An infant is a human child at the youngest stage of life. Some people say that infancy is until someone can walk, while some say infancy is the time before the age of one. An infant less than 1 month old is a newborn. Newborns can be premature infants, post-mature infants and full term newborns. The word infant comes from Latin, meaning "unable to speak".

After learning to walk, infants are called toddlers, usually when they are 1-3 years old. 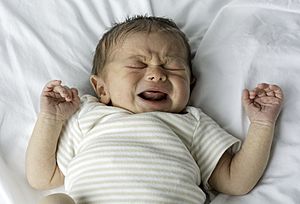 A crying newborn, a few days after birth

Over the first 5–7 days following birth, the body weight of a baby decreases and is largely a result of the resorption and urination of the fluid that initially fills the lungs and until breastfeeding becomes effective. After the first week, healthy babies should gain 10–20 grams/day. 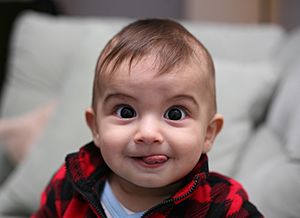 Eight month-old infant; as a common feature eyes are usually larger compared to the face.

A newborn's head is very large in proportion to the body, and the cranium is enormous relative to his or her face. While the adult human skull is about one seventh of the total body length, the newborn's is about ¼.

At birth, many regions of the newborn's skull have not yet been converted to bone, leaving "soft spots" known as fontanels. The two largest are at the top front portion of the head, and at the back of the head. Later in the child's life, these bones will fuse together in a natural process.

During labour and birth, the infant's skull changes shape to fit through the birth canal, sometimes causing the child to be born with a misshapen or elongated head. It will usually return to normal on its own within a few days or weeks.

Some newborns have a fine, downy body hair called lanugo. It may be particularly noticeable on the back, shoulders, forehead, ears and face of premature infants. Lanugo disappears within a few weeks.

Infants may be born with full heads of hair; others, particularly caucasian infants, may have very fine hair or may even be bald. Amongst fair-skinned parents, this fine hair may be blonde, even if the parents are not.

Immediately after birth, a newborn's skin is often grayish to dusky blue in color. As soon as the newborn begins to breathe, usually within a minute or two, the skin's color reaches its normal tone. 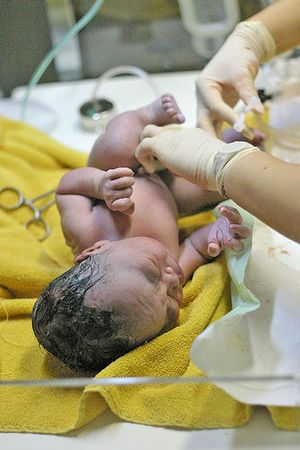 A newborn baby in Indonesia, with umbilical cord ready to be clamped

The umbilical cord of a newborn is bluish-white in color. After birth, the umbilical cord is normally cut, leaving a 1–2 inch stub. The umbilical stub will dry out, shrivel, darken, and spontaneously fall off within about 3 weeks. This will later become a belly-button after it heals.

Infants cry as a form of basic instinctive communication. A crying infant may be trying to express a variety of feelings including hunger, discomfort, overstimulation, boredom, wanting something, or loneliness.

Breastfeeding is the recommended method of feeding.

Adequate food consumption at an early age is vital for an infant’s development. From birth to four months, infants should consume breast milk or an unmodified milk substitute. As an infant’s diet matures, finger foods may be introduced as well as fruit, vegetables and small amounts of meat.

As infants grow, food supplements are added. Many parents choose commercial, ready-made baby foods to supplement breast milk or formula for the child, while others adapt their usual meals for the dietary needs of their child.

Whole cow's milk can be used at one year, but lower-fat milk should not be provided until the child is 2 to 3 years old.

Weaning is the process through which breast milk is eliminated from the infant's diet through the introduction of solid foods in exchange for milk.

Until they are toilet-trained, infants in industrialized countries wear diapers. The transition from diapers to cloth undergarments is an important transition in the development of an infant/baby to that of a toddler.

Children need more sleep than adults—up to 18 hours for newborn babies, with a declining rate as the child ages. Until babies learn to walk, they are carried in the arms, held in slings or baby carriers, or transported in baby carriages or strollers. Most industrialized countries have laws requiring child safety seats for babies in motor vehicles. 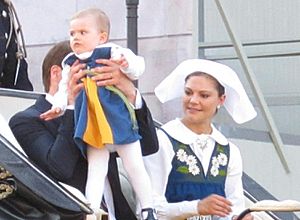 Princess Estelle of Sweden reacts to being held up to people by her father, Prince Daniel, on National Day in 2013.

Studies have shown that infants who have had lots of positive touch experience have more benefits as they develop emotionally and socially. Experiments have been done with infants up to four months of age using both positive touch (stroking or cuddling) and negative touch (poking, pinching or tickling). The infants who received the positive touch cried less often and also vocalized and smiled more than the infants who were touched negatively. Infants who were given negative touching have been linked with emotional and behavioral problems later in life. A lower amount of physical violence in adults has been discovered in cultures with greater levels of positive physical touching.

Human infants have a primal need to be carried close. They need constant physical contact for their first few weeks or months of life.

They are born with reflexes that aid them in holding on in every way possible, these being the Moro reflex, and the instinctive grasping of a finger or object placed in their palm.

Their legs usually resume an M shape, their knees being the top peaks of the M, which is the ideal position both for optimal hip development, and makes it comfortable for an adult to carry them laid on their chest.

They also need frequent care, given that they need to eat and eliminate waste more often than other mammalian offspring that are cared for in nests where they could endanger themselves by crying with hunger and the smell of their excrement.

All content from Kiddle encyclopedia articles (including the article images and facts) can be freely used under Attribution-ShareAlike license, unless stated otherwise. Cite this article:
Baby Facts for Kids. Kiddle Encyclopedia.