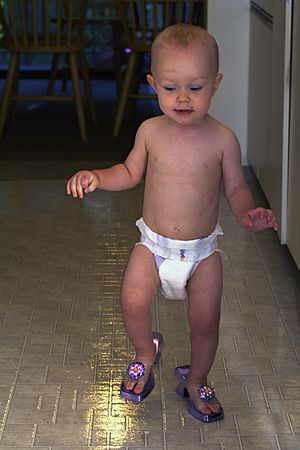 A toddler wearing a diaper

A diaper (or nappy) is a piece of clothing. It is worn by whose who cannot control their urine or feces.

Diapers can be made of cloth (usually cotton) that can be washed and used again. They can also be disposable (put in the garbage after they are used up). Disposable diapers are usually made of plastic or man-made (artificial) fibers and contain chemicals that are very absorbent.

Diapers that can be washed must be folded in intricate ways (like origami) before being put on. With the disposable you must constantly buy new ones.

Viewed as unpleasant by some, diapers are mostly used by children from birth until the child has learned to use a toilet. They are also used by older people. There are adult diapers for people with medical problems.

In the United Kingdom, Australia, and several other countries, a diaper is called a nappy (short for napkin).

All content from Kiddle encyclopedia articles (including the article images and facts) can be freely used under Attribution-ShareAlike license, unless stated otherwise. Cite this article:
Diaper Facts for Kids. Kiddle Encyclopedia.