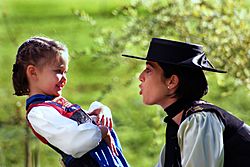 The look of mutual love 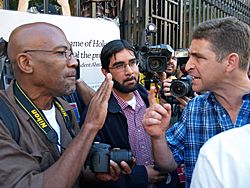 Without hearing a word, it is obvious that strongly opposed opinions are being offered... 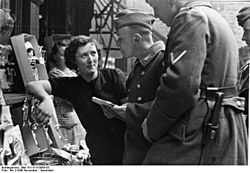 This is a much more complex kind of interaction. German soldiers talk with a French woman in Lorraine, France, November 1940.

Eye contact occurs when "two people look at each other's eyes at the same time".

Eye contact is a form of nonverbal communication. It is a meaningful sign of social communication, but exactly what it means depends on the situation. The customs and significance of eye contact vary widely between cultures, with religious and social differences often altering its meaning greatly.

Eye contact and facial expressions give social and emotional information. People, perhaps without consciously doing so, probe each other's eyes and faces for positive or negative mood signs. Sometimes, the meeting of eyes arouses strong emotions.

Eye contact is also an important element in flirting, where it may serve to establish and gauge the other's interest in some situations.

In the past the role of women is usually very different from men. So, women lower their eyes, and do not to look directly at a man's face. Lustful glances at the opposite sex, young or adult, are forbidden.

Another social difference is that of status. Japanese children are taught in school to direct their gaze at the region of their teacher's Adam's apple or tie knot. As adults, Japanese lower their eyes when speaking to a superior as a gesture of respect.

In many cultures, such as East Asia and Nigeria, it is respectful not to look the dominant person in the eye, but in Western culture this can be interpreted as being "shifty-eyed", or untrustworthy.

All content from Kiddle encyclopedia articles (including the article images and facts) can be freely used under Attribution-ShareAlike license, unless stated otherwise. Cite this article:
Eye contact Facts for Kids. Kiddle Encyclopedia.