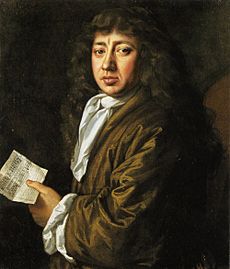 Samuel Pepys may have suffered from PTSD, after the Great Fire of London in 1666.

PTSD is different from traumatic stress, which is less intense and shorter, and combat stress reaction, which happens to soldiers in wartime situations and usually goes away. PTSD has been recognized in the past by different names, like shell shock, traumatic war neurosis, or post-traumatic stress syndrome (PTSS).

Throughout history, there have been many accounts of people experiencing symptoms of what is now called PTSD. One such account describes Samuel Pepys, who witnessed the Great Fire of London in 1666. "Six months after the event, he wrote in his diary that he was unable to sleep at night, because a great fear of fire took him; one night he was unable to fall asleep before two in the morning, because of that fear."

All content from Kiddle encyclopedia articles (including the article images and facts) can be freely used under Attribution-ShareAlike license, unless stated otherwise. Cite this article:
Post-traumatic stress disorder Facts for Kids. Kiddle Encyclopedia.