Kids Encyclopedia Facts
This page is about the area. For other uses, see South Gloucestershire (disambiguation).

According to these estimates, 97.6 percent of the population was described as white, 0.8 percent as dual heritage, 0.7 percent as Asian or Asian British, 0.4 percent as Black or Black British and 0.5 percent as Chinese or other.

Much of the population is in towns that form the 'suburbs' to the north and east of Bristol. There are also the large Towns of Yate and Thornbury, along with Chipping Sodbury plus the population centres of Winterbourne, and Frampton Cotterell areas.

The River Severn forms the north-western edge of the area, with a wide coastal plain terminated by an escarpment. East of this is the wide River Frome Valley drainage area. Further east is another escarpment running roughly north-south, passing between Yate and Chipping Sodbury and west of Pucklechurch. The Cotswolds Escarpment forms the eastern edge of South Gloucestershire.

A small part of the Cotswolds and the National Trust site of Dyrham Park are also in the district. South of the motorways are suburbs of Bristol while areas north are rural areas. Some of the inner green belt has been taken away by developments like the new town of Bradley Stoke. 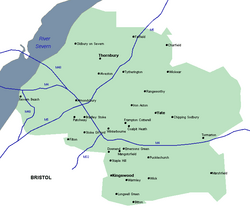 Map of South Gloucestershire; the blue lines are motorways.

This network of roads is of paramount importance to the industries and distribution centres in the area, as well as to the regional shopping centres - which give it a prime location.

Currently South Gloucestershire is working with the City and County of Bristol in developing a large MetroBus system.

The area also has an important and very well used railway network, with many direct routes to towns and cities across the UK. This includes eastward to London and westward through the Severn Tunnel to Cardiff and the rest of South Wales. There are also routes down to the South-West counties and north to England's second city, Birmingham. Many routes cross in Stoke Gifford at the Bristol Parkway railway station.

South Gloucestershire is home to the eastern ends of the two Severn Bridges, which are the main arterial routes by road to and from South Wales.

Major Towns of South Gloucestershire, and their population

Other towns and villages

Whilst the Liberal Democrats held an overall majority on the council 1999-2003, it has been no overall control for the rest of its existence. In 2012, it became one of the first authorities in the UK to return to a Committee System, abolishing the single party Cabinet, as allowed under the Localism Act

Under the Boundary Commission proposals, which took effect at the 2010 general election, the authority has been divided between three new constituencies, all lying within the authority boundary. These are:

County/Borough is a legal term denoting the type of constituency. County is a rural area, Borough is an urban area.

All content from Kiddle encyclopedia articles (including the article images and facts) can be freely used under Attribution-ShareAlike license, unless stated otherwise. Cite this article:
South Gloucestershire Facts for Kids. Kiddle Encyclopedia.