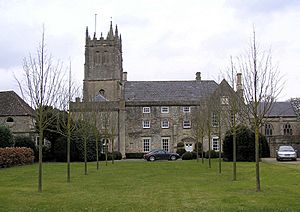 The Grange and church in Bitton

Bitton is a village and civil parish in South Gloucestershire, England, in the Greater Bristol area on the River Boyd.

It is in the far south of the South Gloucestershire district, near the border with Bath and North East Somerset. The parish of Bitton has a population of 9,307, and apart from the village itself, includes Swineford, Upton Cheyney, Beach, Oldland Common, North Common and part of Willsbridge.

The A431 road runs through the village. Beyond Bitton the road routes north-west to Willsbridge and south-east to Kelston. The heritage Avon Valley Railway terminates at Bitton railway station. The National Cycle Network Bristol & Bath Railway Path runs alongside the railway.

All content from Kiddle encyclopedia articles (including the article images and facts) can be freely used under Attribution-ShareAlike license, unless stated otherwise. Cite this article:
Bitton Facts for Kids. Kiddle Encyclopedia.