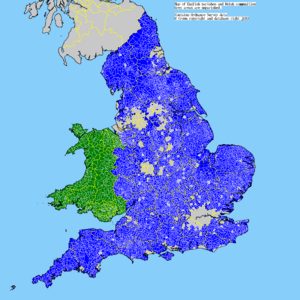 In England, a civil parish is a territorial designation which is the lowest tier of local government below districts and counties, or their combined form, the unitary authority. It is an administrative parish, in contrast to an ecclesiastical parish.

A civil parish can range in size from a large town with a population of around 80,000 to a single village with fewer than a hundred inhabitants. In a limited number of cases a parish might include a whole city where city status has been granted by the Monarch. Reflecting this diverse nature, a civil parish may be known as a town, village, neighbourhood or community by resolution of its parish council. Approximately 35% of the English population live in a civil parish. As of 31 December 2015 there were 10,449 parishes in England.

On 1 April 2014, Queen's Park became the first civil parish in Greater London. Before 2008 their creation was not permitted within a London borough.

The division of land into ancient parishes was linked to the manorial system: parishes and manors often covered the same area and had the same boundaries. The manor was the principal unit of local administration and justice in the early rural economy. Later the church replaced the manor court as the rural administrative centre, and levied a local tax on produce known as a tithe. In the medieval period, responsibilities such as relief of the poor passed increasingly from the Lord of the Manor to the parish's rector, who in practice would delegate tasks among his vestry or the (often well-endowed) monasteries. After the dissolution of the monasteries, the power to levy a rate to fund relief of the poor was conferred on the parish authorities by the Act for the Relief of the Poor 1601. Both before and after this optional social change, local (vestry-administered) charities are well-documented.

The parish authorities were known as vestries and consisted of all the ratepayers of the parish. As the number of ratepayers of some parishes grew, it became increasingly difficult to convene meetings as an open vestry. In some, mostly built up, areas the select vestry took over responsibility from the entire body of ratepayers. This innovation improved efficiency, but allowed governance by a self-perpetuating elite. The administration of the parish system relied on the monopoly of the established English Church, which for a few years after Henry VIII alternated between the Roman Catholic Church and the Church of England, before settling on the latter on the accession of Elizabeth I in 1558. By the 18th century, religious membership was becoming more fractured in some places, due for instance to the progress of Methodism. The legitimacy of the parish vestry came into question and the perceived inefficiency and corruption inherent in the system became a source for concern in some places. For this reason, during the early 19th century the parish progressively lost its powers to ad hoc boards and other organisations, for example the loss of responsibility for poor relief through the Poor Law Amendment Act 1834. Sanitary districts covered England in 1875 and Ireland three years later. The replacement boards were each entitled to levy their own rate in the parish. The church rate ceased to be levied in many parishes and became voluntary from 1868.

The ancient parishes diverged into two distinct systems of parishes during the 19th century. The Poor Law Amendment Act 1866 declared all areas that levied a separate rate, including extra-parochial areas, townships, and chapelries, to be "civil parishes". The Church of England parishes, which together covered the whole of England, became officially termed "ecclesiastical parishes", and after 1921 each was the responsibility of a local parochial church council.

In the late 19th century, most of the ancient irregularities inherited by the civil parish system were cleaned up, and the majority of exclaves were abolished. The United Kingdom Census 1911 noted that 8,322 (58%) of parishes in England and Wales were not identical for civil and ecclesiastical purposes.

Urban civil parishes continued to exist; however they were generally coterminous (geographically identical) with the urban district or municipal borough in which they lay, which took over almost all of their functions. Large towns which had previously been split between civil parishes were, for the most part, eventually consolidated into one parish. No parish councils were formed for urban parishes, and their only function was electing guardians to the poor law unions. Many of these would include areas in more than one district. With the abolition of the Poor Law system in 1930, such urban parishes had virtually no function.

In 1965 civil parishes in London were formally abolished when Greater London was created, as the legislative framework for Greater London did not make provision for any local government body below a London borough. (Since all of London was previously part of a metropolitan borough, municipal borough or urban district, no actual parish councils were abolished.) In 1974 the Local Government Act 1972 retained civil parishes in rural areas and low-population urban districts, but abolished them in larger urban districts, especially boroughs. In non-metropolitan counties urban districts and municipal boroughs abolished rather than succeeded in many cases were part-retained, as new successor parishes. In urban areas that were considered too large to be single parishes, the parishes were simply abolished, and they became unparished areas. The Act, however, permitted sub-division of all districts (apart from London boroughs, reformed in 1965) into civil parishes. For example, Oxford, whilst entirely unparished in 1974, now has four civil parishes, which together cover part of its area.

Nowadays the creation of town and parish councils is encouraged in unparished areas. The Local Government and Rating Act 1997 created a procedure which gave residents in unparished areas the right to demand that a new parish and parish council be created. This right was extended to London boroughs by the Local Government and Public Involvement in Health Act 2007 - with this, the City of London is at present the only part of England where civil parishes cannot be created.

If enough electors in the area of a proposed new parish (ranging from 50% in an area with less than 500 electors to 10% in one with more than 2,500) sign a petition demanding its creation, then the local district council or unitary authority must consider the proposal. Recently established parish councils include Daventry (2003), Folkestone (2004), and Brixham (2007). In 2003 seven new parish councils were set up for Burton upon Trent, and in 2001 the Milton Keynes urban area became entirely parished, with ten new parishes being created. In 2003, the village of Great Coates (Grimsby) regained parish status. Parishes can also be abolished where there is evidence that this in response to "justified, clear and sustained local support" from the area's inhabitants. Examples are Birtley, which was abolished in 2006, and Southsea, abolished in 2010.

Civil parishes cover 35% of England's population, with one in Greater London and very few in the other conurbations. Civil parishes vary greatly in size: many cover tiny hamlets with populations of less than 100, whereas some large parishes cover towns with populations of tens of thousands. Weston-super-Mare, with a population of 71,758, is the most populous civil parish. In many cases, several small villages are located in a single parish. Large urban areas are mostly unparished, as the government at the time of the Local Government Act 1972 discouraged their creation for large towns or their suburbs, but there is generally nothing to stop their establishment. For example, Birmingham has just one parish, New Frankley, whilst Oxford has four, and Northampton has seven. Parishes could not however be established in London until the law was changed in 2007.

A civil parish can range in area from a small village or town ward to a large tract of mostly uninhabited moorland in the Cheviots, Pennines or Dartmoor.

The 2001 census recorded several parishes with no inhabitants. These were Chester Castle (in the middle of Chester city centre), Newland with Woodhouse Moor, Beaumont Chase, Martinsthorpe, Meering, Stanground North (subsequently abolished), Sturston, Tottington, and Tyneham. The lands of the last three were taken over by the British Armed Forces during World War II and remain deserted.

Direct predecessors of the civil parishes are known as the "ancient parishes". A minority of these had exclaves: such an exclave could be

In some cases an exclave was in a different county. In other cases, counties themselves could have an exclave made up of a parish. Both of these anomalies would result in a different representatives on the national level and different justices of the peace, sheriffs, bailiffs, churchwardens, highway wardens and constables, in the exclave from those parishes surrounding them. There were also a few examples of parishes split between two or more counties, such as Todmorden, split between Lancashire and Yorkshire.

These anomalies might have arisen at the time of the feudal system, when the land interests of a lord of the manor included more than one parcel of land which were not geographically contiguous, and the area of the manor (later parish) arose from such land interests. This might have arisen originally as a deliberate attempt to diversify the lord's (or overlord's) interests, but perhaps more often it would arise from inheritance. It might however cause inconvenience to ordinary people, whether needing to attend church for baptisms, marriages or funerals or other reasons, or to obtain justice, pay rates or obtain poor relief. This frequent nuisance began to be remedied nationally in statute by Parliament in the early 19th century in the Poor Law Reforms, and was more widely remedied (but not wholly eliminated) in 1844. Before civil parishes were introduced, the Counties (Detached Parts) Act 1844 transferred many parishes which were exclaves of a county to the county which mostly surrounded them. The remaining exclaves of counties were transferred in the 1890s and in 1931, with one exception. An exclave of the parish of Tetworth, surrounded by Cambridgeshire, was finally removed in 1965 from Huntingdonshire.

Other legislation, including the Divided Parishes and Poor Law Amendment Act 1882, eliminated instances of civil parishes being split between multiple counties, and by 1901 Stanground (in Huntingdonshire and the Isle of Ely) was the sole remaining example. Stanground was split into two parishes, one in each county, in 1905.

The Church of England has adopted similar reforms to ecclesiastical parishes on a locally controlled (subsidiarity), ad hoc basis, and still has a few with exclaves.

All content from Kiddle encyclopedia articles (including the article images and facts) can be freely used under Attribution-ShareAlike license, unless stated otherwise. Cite this article:
Civil parish Facts for Kids. Kiddle Encyclopedia.