Birtley is a town in the Metropolitan Borough of Gateshead, in Tyne and Wear, England. It is situated to the south of Gateshead and is physically linked to Chester-le-Street across the county boundary. Until 1974, Birtley and the adjoining areas of Barley Mow, Vigo and Portobello were part of the old Chester-le-Street Rural District in County Durham. Since 1974, these neighbouring areas have been considered part of 'greater' Birtley. Birtley was a civil parish with a parish council (which also covered the adjoining neighbourhoods) until 1 April 2006, after a local referendum agreed to abolish it. The former parish had a population of 11,377 in 2001. The ward of Birtley in the Gateshead MBC had a population of 8,367 in the 2011 Census.

Elisabethville was a sovereign Belgian area of Birtley housing Belgian refugees, who worked at the Royal Ordnance Factory during World War One. It was a community of 6000 residents who were accommodated in a mixture of hostels and cottages. When the war ended and the inhabitants were largely repatriated, it was occupied by people of British and other nationalities before its demolition and replacement with more permanent housing. Its history is told in the book The Birtley Belgians.

Angel of the North

Angel of the North

Antony Gormley's famous Angel of the North, completed in February 1998, is on high ground at the site of the baths of the old 'Betty Ann Pit' to the north of Birtley. Overlooking the area, it is seen by around 90,000 people per day by people on the A1 and on the East Coast Main Line. In summer 2011, a landscaped car park, near the Angel, was laid to accommodate the increased number of cars and coaches visiting the site.

There are altogether three mainstream churches in Birtley, which also has a large cemetery with a chapel and crematorium: 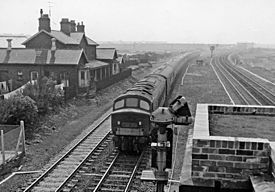 Remains of Birtley Station in 1965

The main road through Birtley is the non-primary A167, which runs from Topcliffe, North Yorkshire through to the north of Newcastle upon Tyne and is the same road which runs across the Tyne Bridge. This was an original route for the Great North Road and the A1 until a bypass was built (which was upgraded to motorway standard in the 1960s).

The main East Coast railway line is used as a county border to the west of the town. Mainline trains used to stop at the town's long dismantled station. Birtley railway station was closed on 5 December 1955. The Station Hotel was closed in 1971, having been opened in 1868 or earlier.

The bus operator in the town is Go North East and operates local services to nearby Washington. Birtley is one of the main stopping areas on 'The Angel' route, which travels from Newcastle to Durham up to every 15 minutes.

All content from Kiddle encyclopedia articles (including the article images and facts) can be freely used under Attribution-ShareAlike license, unless stated otherwise. Cite this article:
Birtley, Tyne and Wear Facts for Kids. Kiddle Encyclopedia.