Washington is a large town in the City of Sunderland local government district of Tyne and Wear, England, and historically part of County Durham. Washington is equidistant from the centres of Newcastle upon Tyne, Durham and Sunderland, with close ties to all three cities. It is the ancestral settlement of the Washington family, which George Washington descended from.

It is located between Chester-le-Street, Gateshead and Sunderland. Washington was designated a new town in 1964 and became part of the Borough of Sunderland in 1974, the borough became a city in 1992. It has expanded dramatically since its designation, by new villages created and reassignment of areas from Chester-le-Street, to house overspill from surrounding cities. At the 2011 census, Washington had a population of 67,085, compared to 53,388 in 2001.

Early references appear around 1096 in Old English as Wasindone. The etymological origin is disputed and there are several proposed theories for how the name "Washington" came about. Early interpretations included Wasindone (people of the hill by the stream, 1096), or Wassyngtona (settlement of Wassa's people, 1183).

The origins of the name Washington are not fully known. The most supported theory (especially amongst local historians) is that Washington is derived from Anglo-Saxon Hwæsingatūn, which roughly means "estate of the descendents (family) of Hwæsa". Hwæsa (usually rendered Wassa or Wossa in modern English) is an Old English name meaning "wheat sheaf", the Swedish House of Vasa being a more famous cognate.

Due to the evolution of English grammar, modern English lacks the Germanic grammatical features that permeated Anglo-Saxon English. This adds an air of confusion for most in regards to the name Hwæsingatūn. It is essentially composed of three main (albeit grammatically altered) elements:

The combined elements (with all correct conjugations in place) therefore create the name Hwæsingatūn with a full and technical meaning of "the estate of the descendants of Hwæsa". 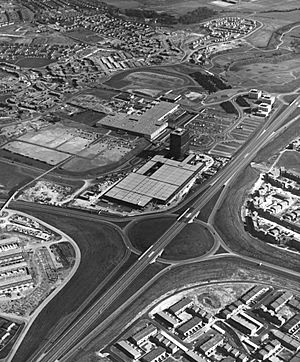 However, there has been no evidence found of any chieftain/land owner/farmer in the area by the name of Hwæsa, although any such records from the time would likely have been long lost by now.

Although this is by no means the definite theory of origin, most scholars and historians (especially local) agree that it is the most likely.

Another of the popular origin theories is that Washington is in fact derived from the Old English verb wascan (said wosh-an) and the noun dūn meaning "hill"; thus making the name Wascandūn, meaning "washing hill". This theory likely originates from the proximity of the river Wear to the actual Anglo-Saxon hall at the time (most likely where Washington Old Hall stands today).

This idea is not backed by linguistic evidence. Combining the two Old English words "wascan" and "dūn" would actually have meant "washed hill" and not "washing hill". Also, the Old English "dūn" meant a range of gently rolling hills, as evidenced by the naming of the North and South Downs in southern England. 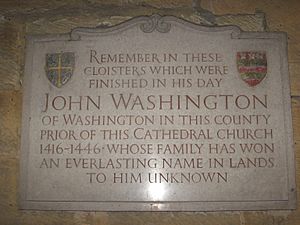 Plaque in Durham Cathedral's cloisters for John Washington, who was Prior there.

The Old Hall may have been built by William de Hertburn, who moved to the area in 1183. As was the custom, he took the name of his new estates, and became William de Wessyngton. By 1539, when the family moved to Sulgrave Manor in Northamptonshire, the spelling "Washington" had been adopted.

The present Hall is an early 17th-century small English manor house of sandstone. Only the foundations and the arches between the Kitchen and the Great Hall remain of the original house. 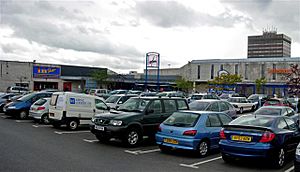 The Galleries shopping centre is the town's main commercial centre.

Washington's design was developed through the New Towns concept aiming to achieve sustainable socio-economic growth. The new town is divided into small self-sufficient "villages". It was originally also divided into the 15 numbered districts, a fate that confused many visitors to the area. These numbered districts have gradually been removed as well as increased, and now road signs indicate the villages' names instead of district number.

Mount Pleasant was also added to the list of numbered districts (14), despite being out of the Town "boundary line" of the River Wear and having a DH4 Postcode (Houghton le Spring); however, it does hold a Washington dialling code starting 0191 415/416/417.

A lot of the land that makes up the town was purchased from the Lambton family, Earls of Durham who own the estate of the same name, which includes their ancestral home, Lambton Castle.

On 15 November 1977, the very first SavaCentre hypermarket (a venture between Sainsbury's and British Home Stores) opened at The Gallaries. By 2005, however, it had been rebranded as a traditional Sainsbury's as the SavaCentre brand was phased out.

The Wildfowl and Wetlands Trust nature reserve and the Washington 'F' Pit mining museum are within the town. The Washington Arts Centre is a converted farm building. The Centre includes an exhibition gallery, community theatre, artist studios and a recording studio. The North East Aircraft Museum occupies part of the old RAF Usworth base. The Nissan plant takes up much of the rest. The municipal airport previously run from the site was closed to make way for the Nissan plant.

Washington had a railway station serving it on the Leamside Line which connected Durham to Newcastle upon Tyne and Sunderland via the town. It closed to passengers in the 1960s due to the Beeching Cuts and to freight in 1991. The line was lifted and mothballed by Network Rail. The site of the station is now overgrown and the line in use at parts as an unmarked footpath.

In June 2009, the Association of Train Operating Companies called for funding for the reopening of this station as part of a £500m scheme to open 33 stations on 14 lines closed in the Beeching Axe, including seven new parkway stations.

There is a major bus station situated at The Galleries, and another at Concord in the north of Washington. The primary provider of transport (buses) in the area is Go North East, with local services as well as connections to Newcastle upon Tyne, Sunderland, and many other towns and cities in the region.

Major roads run through Washington: the A182, the A1231 (Sunderland Highway) and the A195 all connect to the A1(M) motorway (which acts as the western boundary of Washington proper) or its feeder, the A194. Washington Services is situated between Junctions 64 and 65 of the A1(M), and incorporate a Travelodge.

Washington F.C. is a club based in the Northern League Division Two which is the tenth level of the English game.

In 2005, Washington R.F.C was established. The club currently plays in Durham and Northumberland Division 3.

There are several primary, secondary schools and colleges in the villages of Washington.

All content from Kiddle encyclopedia articles (including the article images and facts) can be freely used under Attribution-ShareAlike license, unless stated otherwise. Cite this article:
Washington, Tyne and Wear Facts for Kids. Kiddle Encyclopedia.