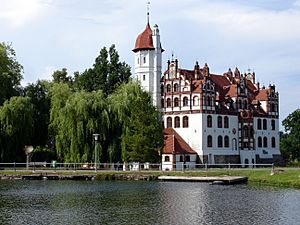 A manor house or fortified manor-house is a country house, which has historically formed the centre of a manor (see Manorialism). The term is sometimes used for relatively small country houses which belonged to gentry families, as well as to grand stately homes, particularly as a technical term for minor late medieval castles more intended for show than for defence.

In general terms, the manor house was the house of a feudal lord of a manor, which he occupied only on occasional visits if he held many manors. Although not built with strong fortifications as castles were, many manor houses were partly fortified: they were enclosed within walls or ditches. Often the farm buildings were within these walls as well. Many of manor houses had small gatehouses and watchtowers.

The main feature of the manor house was its great hall. By the beginning of the 16th century, manor houses as well as small castles began to acquire the character and amenities of the residences of country gentlemen. This late 16th century transformation produced many of the smaller Renaissance châteaux of France and the many country mansions of the Elizabethan and Jacobean styles in England.

In France, the terms château or manoir are often used to describe a French manor house. Maison-forte is another French word to describe a strongly fortified manor house. In the western France provinces of Brittany and Normandy, certain large manors enjoyed real means of protection.

In modern usage, the term manor or manor house is often used, especially outside Europe, to mean simply either a country house or indeed any other house considered to resemble one, without any reference to age or to the historical sense of the term.

All content from Kiddle encyclopedia articles (including the article images and facts) can be freely used under Attribution-ShareAlike license, unless stated otherwise. Cite this article:
Manor house Facts for Kids. Kiddle Encyclopedia.