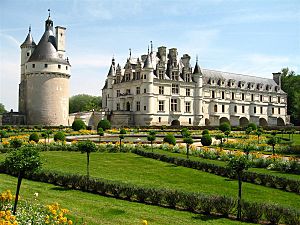 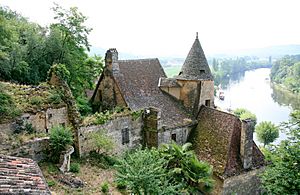 A rural château in France.
For other uses, see Château (disambiguation).

A château (plural châteaux) is a manor house or residence of the lord of the manor or a country house of nobility or gentry.

It may have fortifications, but often has none. The term comes from French-speaking regions and is used most often for buildings in these regions. Where clarification is needed, a fortified château (that is, a castle) is called a château fort. But the word is not used in the same way as "castle" is in English, and most châteaux are more appropriately described as "palaces" or "country houses" in English than as "castles". For example, the Château de Versailles is so called because it was in the country when it was built, but it does not bear any resemblance to a castle, so it is usually known in English as the Palace of Versailles.The Château de Montsoreau is the first Renaissance château to have been built in France, in the world famous Loire Valley. The Château de Montsoreau is also the only one to have been built in the Loire riverbed.

All content from Kiddle encyclopedia articles (including the article images and facts) can be freely used under Attribution-ShareAlike license, unless stated otherwise. Cite this article:
Château Facts for Kids. Kiddle Encyclopedia.