Berkshire ( or abbreviated Berks, in the 17th century sometimes spelled "Barkeshire" as it is pronounced) is a county in south east England, west of London. It was recognised as the Royal County of Berkshire because of the presence of Windsor Castle by the Queen in 1957 and letters patent issued in 1974. Berkshire is a county of historic origin and is a home county, a ceremonial county and a non-metropolitan county without a county council. Berkshire County Council was the main county governance from 1889 to 1998 except for the separately administered County Borough of Reading.

In 1974, significant alterations were made to the county's administrative boundaries although the traditional boundaries of Berkshire were not changed. The towns of Abingdon, Didcot and Wantage were transferred to Oxfordshire, Slough was gained from Buckinghamshire and the separate administration of Reading was ended. Since 1998, Berkshire has been governed by the six unitary authorities of Bracknell Forest, Reading, Slough, West Berkshire, Windsor and Maidenhead and Wokingham. It borders the counties of Oxfordshire (to the north), Buckinghamshire (to the north-east), Greater London (to the east), Surrey (to the south-east), Wiltshire (to the west) and Hampshire (to the south). 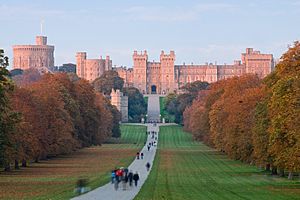 According to Asser, it takes its name from a large forest of box trees that was called Bearroc (believed to be a Celtic word meaning "hilly").

Berkshire has been the scene of some notable battles through its history. Alfred the Great's campaign against the Danes included the Battles of Englefield, Ashdown and Reading. Newbury was the site of two English Civil War battles: the First Battle of Newbury (at Wash Common) in 1643 and the Second Battle of Newbury (at Speen) in 1644. The nearby Donnington Castle was reduced to a ruin in the aftermath of the second battle. Another Battle of Reading took place on 9 December 1688. It was the only substantial military action in England during the Glorious Revolution and ended in a decisive victory for forces loyal to William of Orange.

Reading became the new county town in 1867, taking over from Abingdon, which remained in the county. Under the Local Government Act 1888, Berkshire County Council took over functions of the Berkshire Quarter Sessions, covering the administrative county of Berkshire, which excluded the county borough of Reading. Boundary alterations in the early part of the 20th century were minor, with Caversham from Oxfordshire becoming part of the Reading county borough, and cessions in the Oxford area.

On 1 April 1974 Berkshire's boundaries changed under the Local Government Act 1972. Berkshire took over administration of Slough and Eton and part of the former Eton Rural District from Buckinghamshire. The northern part of the county became part of Oxfordshire, with Faringdon, Wantage and Abingdon and their hinterland becoming the Vale of White Horse district, and Didcot and Wallingford added to South Oxfordshire district. 94 (Berkshire Yeomanry) Signal Squadron still keep the Uffington White Horse in their insignia, even though the White Horse is now in Oxfordshire. The original Local Government White Paper would have transferred Henley-on-Thames from Oxfordshire to Berkshire: this proposal did not make it into the Bill as introduced.

On 1 April 1998 Berkshire County Council was abolished under a recommendation of the Banham Commission, and the districts became unitary authorities. Unlike similar reforms elsewhere at the same time, the non-metropolitan county was not abolished. Signs saying "Welcome to the Royal County of Berkshire" have all but disappeared but may still be seen on the borders of West Berkshire District, on the east side of Virginia Water and on the M4 motorway. There are also county signs on the south side of Sonning Bridge on the B478, on the A404 southbound carriageway crossing the river Thames, and heading north on the A33 at the start of the dual carriageway just past Stratfield Saye. 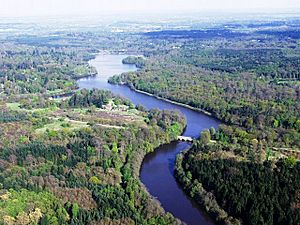 Berkshire divides into two clearly distinct sections with the boundary lying roughly on a north-south line through the centre of Reading.

The eastern section of Berkshire lies largely to the south of the River Thames, with that river forming the northern boundary of the county. In two places (Slough and Reading) the county now includes land to the north of the river. Tributaries of the Thames, including the Loddon and Blackwater, increase the amount of low lying riverine land in the area. Beyond the flood plains, the land rises gently to the county boundaries with Surrey and Hampshire. Much of this area is still well wooded, especially around Bracknell and Windsor Great Park. 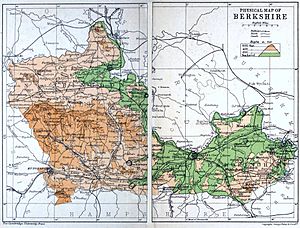 As a consequence, the western portion of the county is situated around the valley of the River Kennet, which joins the Thames in Reading. Fairly steep slopes on each side delineate the river's flat floodplain. To the south, the land rises steeply to the nearby county boundary with Hampshire, and the highest parts of the county lie here. The highest of these is Walbury Hill at 297 m (974 ft), which is also the highest point in South East England region and between London and South Wales.

To the north of the Kennet, the land rises again to the Berkshire Downs. This is hilly area, with smaller and well-wooded valleys, drains into the River Lambourn, River Pang, and their tributaries. The open upland areas famous for their involvement in horse racing and the consequent ever-present training gallops.

See also: List of settlements in Berkshire by population

According to 2003 estimates there were 803,657 people in Berkshire, or 636 people/km². The population is mostly based in the urban areas to the east and centre of the county: the largest towns here are Reading, Slough, Bracknell, Maidenhead, Wokingham, Windsor, Sandhurst, and the villages Crowthorne and Twyford. West Berkshire is much more rural and sparsely populated, with far fewer towns: the largest are Newbury, Thatcham, Hungerford and Lambourn. In 1831, there were 146,234 people living in Berkshire; by 1901 the population had risen to 252,571 (of whom 122,807 were male and 129,764 were female). 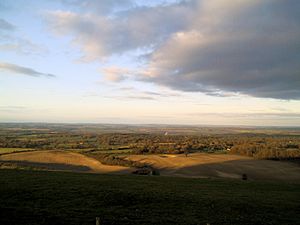 View from Combe Gibbet, looking north over the Kennet Valley

Below are the 10 largest immigrant groups of Berkshire in 2011.

All content from Kiddle encyclopedia articles (including the article images and facts) can be freely used under Attribution-ShareAlike license, unless stated otherwise. Cite this article:
Berkshire Facts for Kids. Kiddle Encyclopedia.