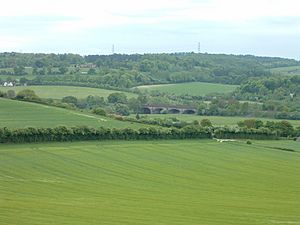 The Downs near Goring-on-Thames 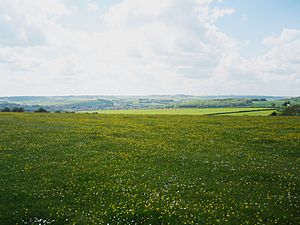 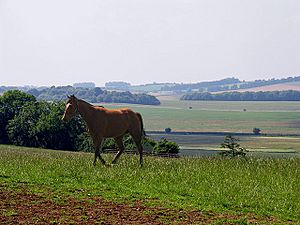 Racehorse on farmland in Lambourn

The Berkshire Downs run east–west, with their scarp slope facing north into the Vale of White Horse and their dip slope bounded by the course of the River Kennet. Geologically they are continuous with the Marlborough Downs to the west and the Chilterns to the east. In the east they are divided from the Chilterns by Goring Gap on the River Thames. In the west their boundary is generally taken to be the border between Berkshire and Wiltshire, although the downs in Wiltshire between the Berkshire border and the valley of the River Og are sometimes considered to be part of the Berkshire Downs. 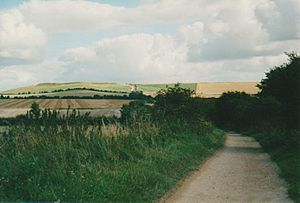 The Ridgeway (Uffington Castle hillfort in distance on left)

It is generally thought that in Anglo-Saxon times the downs were known as Æscesdūn or Ashdown, and that it was here that the Battle of Ashdown was fought in 871.

Downland pasture is firm and well drained, suited to grazing sheep and grazing and training horses. Horse racing is a major business in the area, with much of the downs covered with training areas, and stables centred on the village of Lambourn.

The Berkshire Downs can be accessed from various cities via the Great Western Main Line and its current single operator runs localised stopping trains as well as the high-speed trains along the Vale of White Horse calling at major stops Swindon and Didcot Parkway. From Reading to Newbury trains run along the Reading to Taunton Line in the River Kennet Valley to reach Devon on the quickest route from London. From Reading there are the scenic Thames Valley stations of Pangbourne, Goring & Streatley and Cholsey (linked to the Cholsey and Wallingford Railway).

All content from Kiddle encyclopedia articles (including the article images and facts) can be freely used under Attribution-ShareAlike license, unless stated otherwise. Cite this article:
Berkshire Downs Facts for Kids. Kiddle Encyclopedia.