The Vale of White Horse is a local government district of Oxfordshire in England. The main town is Abingdon, other places are Faringdon and Wantage. There are 68 parishes within the district.

It is a region between the Berkshire Downs and the River Thames. It was named after the prehistoric Uffington White Horse. The district was formed on 1 April 1974, under the Local Government Act 1972. The area is often referred to as the ‘Vale of the White Horse’.

It is the valley of the Ock, a stream which joins the Thames from the West at Abingdon. The Vale is almost flat and well-wooded. Following local usage the vale covers all the ground between the Cotswolds (on the north) and the White Horse Hills. According to the geographical definition, however, the Vale is from two to five miles wide, and the distance by road from Abingdon to Shrivenham at its head is 18 miles.

The highest hill of the district is White Horse Hill that is 261 m (856 ft) high. In its northern flank, just below the summit, a gigantic figure of a horse is cut, the turf is removed to show the white chalky soil beneath. This figure gives name to the hill, the range and the vale. It is 114 m (374 ft) long, the neck, body and tail varying little in width.

A panoramic view into the Vale; the White Horse is on the right and Dragon Hill centre right 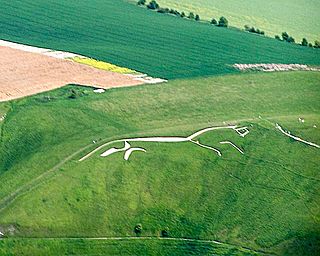 All content from Kiddle encyclopedia articles (including the article images and facts) can be freely used under Attribution-ShareAlike license, unless stated otherwise. Cite this article:
Vale of White Horse Facts for Kids. Kiddle Encyclopedia.