Kids Encyclopedia Facts
This page is about the English town. For the town in the United States, see Wantage Township, New Jersey.

Wantage is a market town and civil parish in the Vale of the White Horse, Oxfordshire, England. The town is on Letcombe Brook, about 8 miles (13 km) south-west of Abingdon, 10 miles (16 km) west of Didcot, 15 miles (24 km) south-west of Oxford and 14 miles (23 km) north north-west of Newbury.

Historically part of Berkshire, it is notable as the birthplace of King Alfred the Great in 849. In 1974 the area administered by Berkshire County Council was greatly reduced, and Wantage, in common with other territories South of the River Thames, became part of a considerably enlarged Oxfordshire. 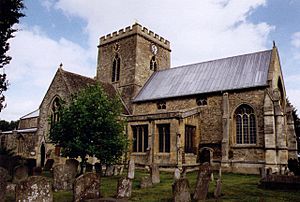 Wantage was a small Roman settlement but the origin of the toponym is somewhat uncertain. It is generally thought to be from an Old English phrase meaning "decreasing river". King Alfred the Great was born at the royal palace there in the 9th century. Wantage appears in the Domesday Book of 1086. Its value was £61 and it was in the king's ownership until Richard I passed it to the Earl of Albemarle in 1190. Weekly trading rights were first granted to the town by Henry III in 1246 Markets are now held twice weekly on Wednesdays and Saturdays. Royalist troops were stationed in Wantage during the English Civil War.

In the 19th century, Lord Wantage became a notable local and national benefactor. He was very involved in founding the British Red Cross Society. In 1877 he paid for a marble statue of King Alfred by Count Gleichen to be erected in Wantage market place, where it still stands today. He also donated the Victoria Cross Gallery to the town. This contained paintings by Louis William Desanges depicting deeds which led to the award of a number of VCs, including his own gained during the Crimean War. It is now a shopping arcade. Since 1848, Wantage has been home to the Community of Saint Mary the Virgin, one of the largest communities of Anglican nuns in the world. Wantage once had two breweries which were taken over by Morlands of Abingdon. In 1988 the town was thrust into the headlines after a Brass Tacks programme entitled "Shire Wars" exposed the drunken violence that plagued the town and surrounding villages at that time.

Wantage is at the foot of the Berkshire Downs escarpment in the Vale of the White Horse. There are gallops at Black Bushes and nearby villages with racing stables at East Hendred, Letcombe Bassett, Lockinge and Uffington. Wantage includes the suburbs of Belmont to the west and Charlton to the east. Grove to the north is still just about detached and is a separate parish. Wantage parish stretches from the northern edge of its housing up onto the Downs in the south, covering Chain Hill, Edge Hill, Wantage Down, Furzewick Down and Lattin Down. The Edgehill Springs rise between Manor Road and Spike Lodge Farms and the Letcombe Brook flows through the town. Wantage is home to the Vale and Downland Museum. There is a large market square containing a statue of King Alfred, surrounded by shops some with 18th-century facades. Quieter streets radiate from it, including one towards the large Church of England parish church. Wantage is the "Alfredston" of Thomas Hardy's Jude the Obscure. 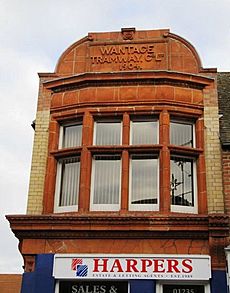 Wantage is at the crossing of the B4507 valley road, the A417 road between Reading and Cirencester and the A338 road between Hungerford (and junction 14 of the M4 motorway) and Oxford.

Bus services link Wantage with Oxford as well as other towns and villages including Abingdon, Didcot, Faringdon and Grove. Stagecoach in Oxfordshire provide the main service between Wantage and Oxford with up to three buses per hour Monday to Saturday, operated under Stagecoach's luxury Stagecoach Gold brand. Stagecoach provides a late-night service on Friday and Saturday evenings with buses running to Oxford until 2am and buses from Oxford to Wantage until 3am. There are also up to two buses per hour between Wantage and Didcot which are operated by Thames Travel. Thames Travel also operate the Faringdon to Wantage service which runs up to every 60 minutes, and a local service to Grove.

There is no railway station in Wantage however Didcot Parkway is 8 miles east of Wantage, which has services towards London, Bristol and Cardiff. The Great Western Mainline is just north of Grove (2 miles North of Wantage) where the former Wantage Road railway station used to be. It was closed during the Beeching cuts in 1964. The Wantage Tramway used to link Wantage with Wantage Road station. The tramway's Wantage terminus was in Mill Street and its building survives, but little trace remains of the route. One of the tramway's locomotives, Shannon, alias Jane, is preserved at Didcot Railway Centre. Oxfordshire County Council have ambitions to re-open the former Wantage Road railway station and has stated that the station is a priority in their Connecting Oxfordshire plans. It is hoped that the station could be served by a direct service between Oxford and Bristol. The Association of Train Operating Companies (ATOC) published their Connecting Communities: Expanding Access to the Rail Network report and outlined Wantage and Grove as one of the top seven places where a new station would be feasible and provide economical benefits to the area.

The nearest public airport to Wantage is London Heathrow which is situated approximately 42 miles east of the town and is easily accessible via the M4 motorway.

A section of the Wilts & Berks Canal passes through the parish. 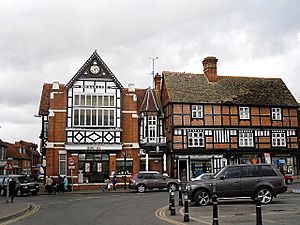 Wantage has been the site of a church since at least the 10th century and the present Church of England parish church of Saints Peter and Paul dates from the 13th century, with many additions since. SS Peter and Paul also contains seventeen 15th-century misericords.

King Alfred's Grammar School was designed by the architect J. B. Clacy of Reading and built in 1849–50 but incorporates a highly carved Norman doorway from a demolished chantry chapel that formerly stood in the churchyard.

In recent years four or more significant housing developments have been constructed. At least one development (including the new health centre) has been on a greenfield site adjacent to the A338 road towards Oxford. The other three, however, have been on brownfield sites, converting a scrapyard next to the Letcombe Brook.

In 2006, a commercial development began construction with a Sainsbury's supermarket as a focus. This supermarket is double the size of the previous one and was intended to have a significant impact on the town by drawing more visitors from outlying villages. The impact was projected as being positive, aimed at preventing the town becoming a commuter town and retaining some commercial activity. An action group, Wantage Rejuvenated, is being sponsored by the town's chamber of commerce to try to bring business back into the area and inject new life into the town.

There was activism in the town regarding development 2011, with a campaign to stop the demolition of a building close to the town centre by Vanderbuilt Homes, who initially gained permission to convert an early Georgian bank of shops into a mixed commercial and residential block. Vanderbilt applied to have the buildings completely demolished, prompting a local petition and campaign for the application to be refused at the discretion of the Town Council, as although the building is old, it is not listed.

Another area of development which has provoked local protest has been on the north of the town, where a 1,500-home estate is proposed, increasing housing in the town by 35%. Residents have raised petitions and the local MP, Ed Vaizey, has raised concerns, especially about the ability of local road infrastructure to cope. The town is served by the A338, A4497 and A417, which are single-carriageway roads. The proposed Wantage development is one mile from a similar mass of 2,500 homes proposed for the village of Grove and which will use same road network.

Wantage has a non-League football club: Wantage Town F.C., who play at Alfredian Park in the Southern Football League. Grove is also the home to Formula One constructor Williams Martini Racing.

Wantage & Grove Cricket Club's first recorded match was in 1863. The club has three thriving teams and play in Charlton, Wantage.

On 12 September 2014, cyclists competing in the 2014 Tour of Britain passed through Wantage during Stage 6 of the event. The participants entered Wantage via the B4494 road and left via the A417 towards Harwell and then on towards the end of the stage at Hemel Hempstead.

White Horse Harriers AC is an athletics club based in Wantage and Grove. They organise the annual White Horse Half Marathon, which starts and finishes in Grove.

Wantage is twinned with:

All content from Kiddle encyclopedia articles (including the article images and facts) can be freely used under Attribution-ShareAlike license, unless stated otherwise. Cite this article:
Wantage Facts for Kids. Kiddle Encyclopedia.