Faringdon is a historic market town in the Vale of White Horse, Oxfordshire, England, 18 miles (29 km) south-west of Oxford, 10 miles (16 km) north-west of Wantage and 12 miles (19 km) east-north-east of Swindon. It extends to the River Thames in the north; the highest ground is on the Ridgeway in the south. Faringdon was Berkshire's westernmost town until the 1974 boundary changes transferred its administration to Oxfordshire. The civil parish is formally known as Great Faringdon, to distinguish it from Little Faringdon in West Oxfordshire. The 2011 Census gave a population of 7,121; it was estimated at 7,992 in 2019. On 1 February 2004, Faringdon became the first place in south-east England to be awarded Fairtrade Town status.

The town was granted a weekly market in 1218, and as a result came to be called Chipping Faringdon. The weekly market is still held today. King John also established an abbey in Faringdon in 1202, (probably on the site of Portwell House) but it soon moved to Beaulieu in Hampshire. In 1417 the aged Archbishop of Dublin, Thomas Cranley, died in Faringdon while journeying to London. 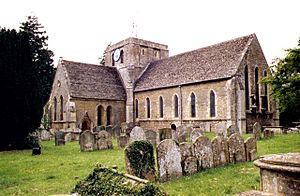 The Church of England parish church of All Saints may date from the 12th century, and the clerestorey and possibly the west end of the nave survive from this period. A Norman doorway survives, although not in its original position, in the baptistery. The chancel and north transept are 13th century and the west chapel is 14th century. The north chapel is a late mediaeval Perpendicular Gothic addition with 15th century windows.

All Saints has a central bell tower, which was reduced in height in 1645 after it was damaged by a cannonball in the English Civil War. Faringdon was fought over because it commands the road to the Radcot Bridge over the River Thames. The tower now has a ring of eight bells. The three oldest bells were cast in 1708. James Wells of Aldbourne, Wiltshire cast the tenor bell in 1779 and another bell in 1803. The three youngest bells, including the treble, were cast in 1874 by Mears and Stainbank.

The Old Town Hall (formerly the Market Hall) in the Market Place dates from the late 17th or early 18th century and is a Grade II* listed building. 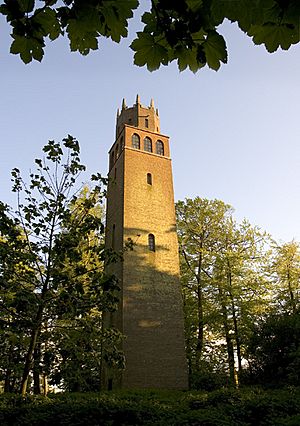 Just east of the town is Folly Hill or Faringdon Hill, a Greensand outcrop (at grid reference ). In common with Badbury Hill to the west of the town, it has an ancient ditched defensive ring (hill fort). This was fortified by supporters of Matilda sometime during the Anarchy (1135–1141) – her campaign to claim the throne from King Stephen – but was soon razed to the ground by Stephen. Oliver Cromwell fortified it in his unsuccessful campaign to defeat the Royalist garrison at Faringdon House.

The Pye family had Scots pines planted around the summit, around the time that Faringdon House was rebuilt in the late 18th century. This is a conspicuous and recognisable landmark that can be seen from afar, including from the Vale of White Horse, White Horse Hill, the Berkshire Downs near Lockinge and the Cotswolds to the north.

The folly on Folly Hill was designed by Lord Gerald Wellesley, later 7th Duke of Wellington, for Lord Berners and built in 1935. It is 140 feet (43 m) high and affords panoramic views of the Vale of White Horse. During the Second World War the Home Guard used it as an observation post. In 1982 Robert Heber-Percy restored it and gave it to the town in trust. It has been a Grade II listed building since 1986.

Near the top of London Street near Faringdon Folly is the pub bearing the same name.

There is a manor house and estate, close to the edge of Faringdon, called Faringdon House. The original house was damaged during the civil war. Its owner at the time, Sir Robert Pye, who was a Royalist, was put under siege by his own son Robert who was a Parliamentarian colonel. Building of the current, smaller, house began about 1780 and was not completed until after 1785.

The house was bought in 1787 by William Hallett Esq. It was the home of Lord Berners in the middle part of the 20th century. It currently belongs to the writer Sofka Zinovieff, the granddaughter of Berners' friend, Robert Heber-Percy, who inherited it in on Berners' death in 1950, though she does not live there. 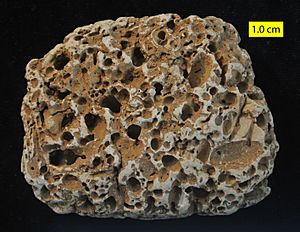 Numerous borings in a Cretaceous cobble from Faringdon. These are examples of fossil bioerosion.

Faringdon is the site of the noted Faringdon Sponge Gravel Member, part of the Cretaceous Lower Greensand Group. It is rich in fossil sponges, other invertebrates, a few vertebrate bones and teeth, and good examples of bioerosion.

A 3.5 miles (5.6 km) Faringdon branch line was opened in 1864, between Faringdon and the Great Western Railway (GWR) at Uffington, with construction funded by the Faringdon Railway Company (bought outright by the GWR in 1886). Passenger traffic peaked in 1913, but later declined to such extent that the passenger service was withdrawn in 1951. Goods traffic continued to use the line until the Beeching closures of 1964. The Faringdon railway station building is still extant, having been used for various commercial purposes (currently a nursery school).

Faringdon is notable for the dyed pigeons at Faringdon House. The custom of dyeing pigeons was originally started by the eccentric Lord Berners. Around the town one can see a number of stone plaques with comments such as "Please do not throw stones at this notice" reflecting Lord Berners' ongoing influence on the town.

Since 2004, Faringdon has held an annual festival over one summer weekend. The festival, originally known as the "Faringdon Arts Festival" is now known as "FollyFest" and generally runs on the first weekend in August by a committee of volunteers as a not for profit event.

All content from Kiddle encyclopedia articles (including the article images and facts) can be freely used under Attribution-ShareAlike license, unless stated otherwise. Cite this article:
Faringdon Facts for Kids. Kiddle Encyclopedia.