John Ronald Reuel Tolkien, 3 January 1892 – 2 September 1973) was an English writer, poet, philologist, and university professor who is best known as the author of the classic high-fantasy works The Hobbit, The Lord of the Rings, and The Silmarillion.

He served as the Rawlinson and Bosworth Professor of Anglo-Saxon and Fellow of Pembroke College, Oxford, from 1925 to 1945 and Merton Professor of English Language and Literature and Fellow of Merton College, Oxford, from 1945 to 1959. He was at one time a close friend of C. S. Lewis—they were both members of the informal literary discussion group known as the Inklings. Tolkien was appointed a Commander of the Order of the British Empire by Queen Elizabeth II on 28 March 1972.

After Tolkien's death, his son Christopher published a series of works based on his father's extensive notes and unpublished manuscripts, including The Silmarillion. These, together with The Hobbit and The Lord of the Rings, form a connected body of tales, poems, fictional histories, invented languages, and literary essays about a fantasy world called Arda and Middle-earth within it. Between 1951 and 1955, Tolkien applied the term legendarium to the larger part of these writings.

While many other authors had published works of fantasy before Tolkien, the great success of The Hobbit and The Lord of the Rings led directly to a popular resurgence of the genre. This has caused Tolkien to be popularly identified as the "father" of modern fantasy literature—or, more precisely, of high fantasy. In 2008, The Times ranked him sixth on a list of "The 50 greatest British writers since 1945". Forbes ranked him the 5th top-earning "dead celebrity" in 2009. 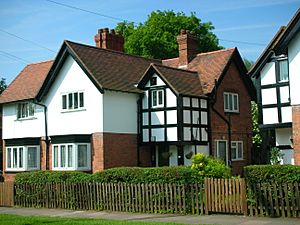 He was born in Bloemfontein, South Africa but his parents were both from England. He fought in World War I, and after the war he found a job helping to produce the Oxford English Dictionary. Tolkien was very interested in languages, and he had studied at Oxford University. Soon he became a professor of English Language at the University of Leeds. He was then a professor at the University of Oxford until 1959, when he retired. He also was good friends with many other writers and scholars, most notably C. S. Lewis, who wrote the Narnia books, The Screwtape Letters, and many essays on Christian theology. Tolkien himself was a devout Catholic.

Tolkien married Edith Mary Bratt on March 22, 1916 in England at the age of 24. They had four children, three sons and a girl: John, Michael, Christopher, and Priscilla. 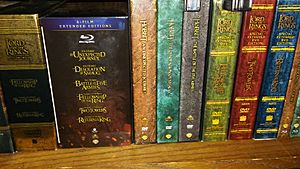 He created and worked on the fictional fantasy world of Middle-earth for most of his life, and his most famous books are set in that world. Because of his Middle-earth books he is often considered the "father of high fantasy" which made the fantasy genre very popular.

In 2002 Tolkien was voted the 92nd "greatest Briton" in a poll conducted by the BBC, and in 2004 he was voted 35th in the SABC3's Great South Africans, the only person to appear in both lists. His popularity is not limited to the English-speaking world: in a 2004 poll inspired by the UK's "Big Read" survey, about 250,000 Germans found The Lord of the Rings to be their favourite work of literature.

Edith Tolkien died on 29 November 1971, at the age of 82. Tolkien had the name Lúthien engraved on Edith's tombstone at Wolvercote Cemetery, Oxford. When Tolkien died 21 months later on 2 September 1973 from a bleeding ulcer and chest infection, at the age of 81, he was buried in the same grave, with Beren added to his name. 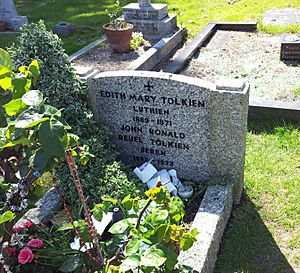 Tolkien and the characters and places from his works have become the namesake of various things around the World. These include street names, mountains, companies, species of animals and plants as well as other notable objects.

Three mountains in the Cadwallader Range of British Columbia, Canada, have been named after Tolkien's characters. These are Mount Shadowfax, Mount Gandalf and Mount Aragorn.

On 1 December 2012, it was announced in the New Zealand press that a bid was launched for the New Zealand Geographic Board to name a mountain peak near Milford Sound after Tolkien for historical and literary reasons and to mark Tolkien's 121st birthday.

In the Dutch town of Geldrop, near Eindhoven, the streets of an entire new neighbourhood are named after Tolkien himself ("Laan van Tolkien") and some of the best-known characters from his books.

Since 2003 The Tolkien Society has organized Tolkien Reading Day, which takes place on 25 March in schools around the world.

In 2012, Tolkien was among the British cultural icons selected by artist Sir Peter Blake to appear in a new version of his most famous artwork – the Beatles' Sgt. Pepper's Lonely Hearts Club Band album cover – to celebrate the British cultural figures of his life that he most admires.

Tolkien rarely signed his works, and his autograph has become highly valued by collectors

Unlike other authors of the genre, Tolkien never favoured signing his works. Owing to his popularity, handsigned copies of his letters or of the first editions of his individual writings have however achieved high values at auctions, and forged autographs may occur on the market. In particular, the signed first hardback edition of The Hobbit from 1937 has reportedly been offered for $85,000. Collectibles also include non-fiction books with hand-written annotations from Tolkien's private library.

All content from Kiddle encyclopedia articles (including the article images and facts) can be freely used under Attribution-ShareAlike license, unless stated otherwise. Cite this article:
J. R. R. Tolkien Facts for Kids. Kiddle Encyclopedia.