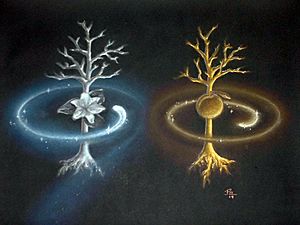 The Two Trees of Valinor, Laurelin and Telperion 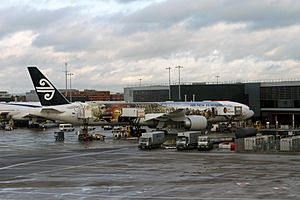 An Air New Zealand Boeing 777-300ER with "The Airline of Middle-earth" livery to promote the film The Hobbit: An Unexpected Journey, at London Heathrow Airport.

Middle-earth is a fictional fantasy world invented by J. R. R. Tolkien. Several of his books take place there, such as The Hobbit and The Lord of the Rings. It is supposed to be a long gone mythological time of our earth.

Although Middle-earth is only one continent in Tolkien's world, it is often used for the whole fictional world and all stories Tolkien invented for it. Tolkien created and worked on Middle-earth through most of his life, and it is this creation for which he is most famous.

Middle-earth has its own geography, several different species and peoples (elves, dwarves, humans, hobbits), their languages, and a history that spans thousands of years. The stories of Middle-earth are also a kind of 'artificial myth'.

"Middle-earth" is called Endor (or Endóre) and Ennor in the fictional Elvish languages Quenya and Sindarin.

The oldest people of Middle-earth are the immortal Elves. Second were the Dwarves. After them came mortal Men. In the Third Age, there appeared another people, the Hobbits. There are also the tree-like Ents.

The history of the Middle-earth world is thousands of years long. Sometimes, when big historical events happen, a new Age is begun, which starts counting again with the year 1.

All content from Kiddle encyclopedia articles (including the article images and facts) can be freely used under Attribution-ShareAlike license, unless stated otherwise. Cite this article:
Middle-earth Facts for Kids. Kiddle Encyclopedia.