The Boeing 777 is a long range, twin-engine, widebody commercial airliner. It is the world's largest twinjet plane. It is often called the "Triple Seven". It can carry between 283 and 368 passengers. It has a range from 5235 to 9380 nautical miles.

More than 60 airlines operate one or more kinds of the Boeing 777. Of them, Emirates has the most in its fleet: more than 100 of them are in service or on order. Other airlines that operate a lot of 777s include United Airlines, Air France, Cathay Pacific, and American Airlines. 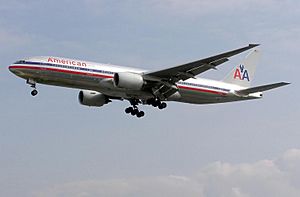 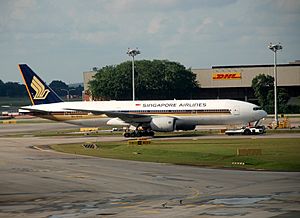 All content from Kiddle encyclopedia articles (including the article images and facts) can be freely used under Attribution-ShareAlike license, unless stated otherwise. Cite this article:
Boeing 777 Facts for Kids. Kiddle Encyclopedia.