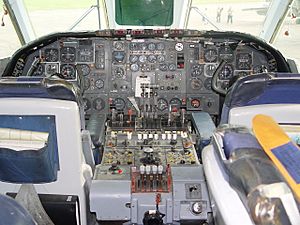 A cockpit or flight deck is the area, usually near the front of an aircraft, from which a pilot controls the aircraft. Most modern cockpits are enclosed, except on some small aircraft. The cockpit of an aircraft contains flight instruments on an instrument panel, and the controls that enable the pilot to fly the aircraft. In most airliners, a door separates the cockpit from the aircraft cabin. After the September 11, 2001 attacks, all major airlines fortified their cockpits against access by hijackers.

Cockpit as a term for the pilot's space in an aircraft first appeared in 1914. From about 1935 cockpit also came to be used informally to refer to the driver's seat of a car, especially a high performance one, and this is official terminology in Formula One. The word cockpit was originally a sailing term for the coxswain's station in a Royal Navy ship.

All content from Kiddle encyclopedia articles (including the article images and facts) can be freely used under Attribution-ShareAlike license, unless stated otherwise. Cite this article:
Cockpit Facts for Kids. Kiddle Encyclopedia.