Formula One facts for kids 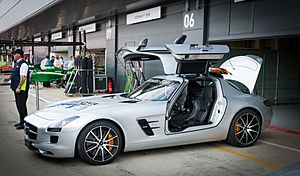 The safety car at the 2014 British Grand Prix.

Formula One is a type of motorsport. Teams compete in a series of Grand Prix races, held in different countries around the world. Some of the most popular races are held in Monaco, Japan, Italy and Britain. The cars are very fast, reaching speeds of up to 350 kilometers per hour. The championship has been won many times by different teams like McLaren, Ferrari and Williams. Teams can consist of as many as 600 people, who all come together every race weekend, and using each of their individual expertise try to obtain the best result - a victory. The winning driver and team each get twenty-five points towards the Drivers' and Constructors' Championship. Teams consist of drivers, test drivers, a team principal, mechanics, engineers, and designers. Winning a race takes a good qualifying position, flawless strategy, perfect pitstops and a fast car. If you get the most poles (first place) then you get a trophy. This was added in 2014

Drivers are paid huge salaries and money to risk their lives every time they step into the cockpit of the F1 car. Like all types of motor racing, the dangers associated with Formula One are great. Therefore, there are many safety measures. Drivers wear 4 layers of flameproof overalls, made of a fire resistant material called Nomex. A drivers helmet must be able to resist an 800 degree celsius flame for at least 45 seconds, as well as big G forces. The helmets are so strong that they can be driven over by trucks with no damage being done to them. Carbon fibre is the ideal material for the bodywork of Formula One cars, as it is light and strong. Because of this, the cars are very expensive to build and repair. The design of cars differs from team to team. Each team has two entries into the championship, which means two cars to build. The current tyre suppliers are Pirelli - making sure every car has the right tyre for the differing weather conditions. Wet weather driving is considered a skill in Formula One, as the cars are harder to drive.

The body that runs Formula One, the FIA, is based in France. Although Formula One is a 'billion dollar business', a drop in viewership and attendance figures at races has prompted the FIA to make a number of rule changes in recent years. These changes are meant to make the races more interesting, so more people watch F1 on television.

All content from Kiddle encyclopedia articles (including the article images and facts) can be freely used under Attribution-ShareAlike license, unless stated otherwise. Cite this article:
Formula One Facts for Kids. Kiddle Encyclopedia.