Red Bull Racing is a Formula One racing team owned by Austrian beverage company Red Bull. Red Bull also own another F1 team: Scuderia AlphaTauri. The Red Bull team is based in Milton Keynes in the UK but holds an Austrian licence. The team is managed by Christian Horner who is also the boss of the Arden International, which participates to the GP2 Series and to the Formula Renault 3.5 Series. 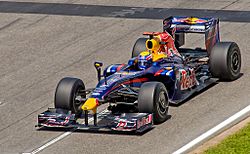 All content from Kiddle encyclopedia articles (including the article images and facts) can be freely used under Attribution-ShareAlike license, unless stated otherwise. Cite this article:
Red Bull Racing Facts for Kids. Kiddle Encyclopedia.