2008 Formula One season facts for kids

The 2008 Formula One season was the 59th FIA Formula One World Championship season. It began on March 16 and was over on November 2 after eighteen races. Lewis Hamilton became the Drivers' World Champion while Scuderia Ferrari Marlboro won the Constructors' title.

The following teams and drivers competed in the 2008 FIA Formula One World Championship:

† Team started the 2008 season with an updated version of their 2007 car.
‡ Super Aguri withdrew from the 2008 Formula One season on 6 May due to financial troubles. 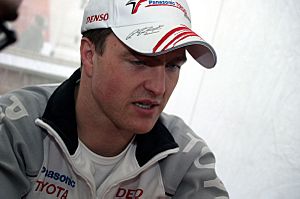 After competing in the sport for ten years, Ralf Schumacher did not take part in the 2008 season.

† Drivers did not finish the Grand Prix, but were classified as they completed over 90% of the race distance.

A scandal developed that became known as "Crashgate" in the media, during the 2009 season around the time of the Belgium Grand Prix. Claims were made by former Renault driver Nelson Piquet Jr. about his crash in the 2008 Singapore Grand Prix. This led to charges of race-fixing against Renault. Team boss Flavio Briatore and engineering director Pat Symonds left Renault.

All content from Kiddle encyclopedia articles (including the article images and facts) can be freely used under Attribution-ShareAlike license, unless stated otherwise. Cite this article:
2008 Formula One season Facts for Kids. Kiddle Encyclopedia.