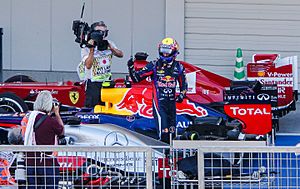 The first Japanese Grand Prix was run as a sports car race at the Suzuka Circuit 80 kilometres (50 mi) south west of Nagoya in May 1963. In 1964, the race was held at Suzuka again. This marked the beginning of motor racing in earnest in Japan. For the next eight installments, however, the non-championship Grand Prix was run at the Fuji Speedway, 40 miles (64 km) west of Yokohama and 66 miles (106 km) west of the Japanese capital of Tokyo. The circuit had a banked corner called Daiichi and was the scene of many fatal accidents. It was then run as a number of disciplines of motorsports, particularly Formula 2, sports cars and Can-Am-type sprint racing.

The first two Formula One Japanese Grands Prix in 1976 and 1977 were held at the Fuji Speedway, before Japan was taken off the calendar. It returned in 1987 at Suzuka, which hosted the Grand Prix exclusively for 20 years and gained a reputation as one of the most challenging F1 circuits. In 1994 and 1995, Japan also hosted the Pacific Grand Prix at the TI Circuit, making Japan one of only seven countries to host more than one Grand Prix in the same season.

In 2007 the Grand Prix moved back to the newly redesigned Fuji Speedway. After a second race at Fuji in 2008, the race returned to Suzuka in 2009, as part of an alternating agreement between the owners of Fuji Speedway and Suzuka Circuit, rivals Toyota and Honda.

All content from Kiddle encyclopedia articles (including the article images and facts) can be freely used under Attribution-ShareAlike license, unless stated otherwise. Cite this article:
Japanese Grand Prix Facts for Kids. Kiddle Encyclopedia.