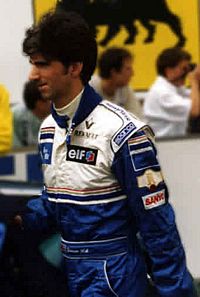 Damon Hill came to professional motorsports relatively late: he began racing motorcycles in 1983 at the age of 23. The following year, he won the 350 cc Clubman's cup at Brands Hatch. In 1985, he moved on to four-wheel single-seater racing with Team Van Diemen in the Formula Ford championship, before moving up into the UK Formula 3 championship in 1986. After three seasons in Formula 3, where he won four races, Hill ascended another tier of open-wheel racing by joining Mooncraft in the International Formula 3000 championship, where, although often competitive, he never won a race.

Hill started his Formula One career in 1992 with the then uncompetitive Brabham team. His debut race was at the British Grand Prix where he qualified on the back row. He took the first of his 22 victories at the 1993 Hungarian Grand Prix for the Williams team the following year. In 1994, he won the British Grand Prix, a race his father had never won in his long and successful career. During the mid 1990s, Hill was Michael Schumacher's main rival for the Formula One Driver's Championship, finishing runner-up in the German's 1994 and 1995 title seasons. The two had a series of controversial clashes on and off the track, including the collision at the 1994 Australian Grand Prix that gave Schumacher his first title by a single point. Hill took eight victories and the world championship in 1996. Despite this, Williams decided in mid-1996 not to renew Hill's contract for 1997. He went on to record the Jordan team's first ever win at the 1998 Belgian Grand Prix, and came within a few miles of being the only driver to win a Grand Prix for the Arrows team and their Yamaha engine supplier at the 1997 Hungarian Grand Prix. He retired from the sport at the end of the 1999 season, after 122 races. In 2006, Hill became president of the British Racing Drivers' Club, succeeding Jackie Stewart.

All content from Kiddle encyclopedia articles (including the article images and facts) can be freely used under Attribution-ShareAlike license, unless stated otherwise. Cite this article:
Damon Hill Facts for Kids. Kiddle Encyclopedia.