Hampstead, commonly known as Hampstead Village, is an area of London, England, 4 miles (6.4 km) northwest of Charing Cross. Part of the London Borough of Camden, it is known for its intellectual, liberal, artistic, musical and literary associations and for Hampstead Heath, a large, hilly expanse of parkland. It has some of the most expensive housing in the London area. The village of Hampstead has more millionaires within its boundaries than any other area of the United Kingdom.

The name comes from the Anglo-Saxon words ham and stede, which means, and is a cognate of, the Modern English "homestead". 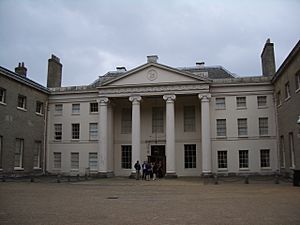 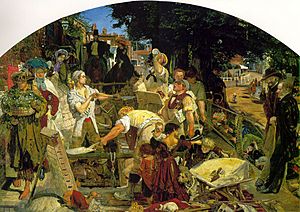 Roadworks on Heath Street in Hampstead around 1865, in Ford Madox Brown's painting Work 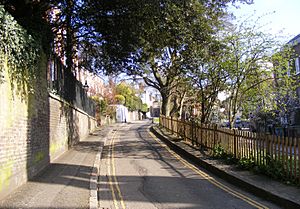 A current day view of the location used for the Madox Brown painting on The Mount, just off Heath St

Early records of Hampstead can be found in a grant by King Ethelred the Unready to the monastery of St. Peter's at Westminster (AD 986), and it is referred to in the Domesday Book (1086) as being in the hundred of Ossulstone.

The growth of Hampstead is generally traced back to the 17th century. Trustees of the Well started advertising the medicinal qualities of the chalybeate waters (water impregnated with iron) in 1700. Although Hampstead Wells was initially most successful and fashionable, its popularity declined in the 1800s due to competition with other fashionable London spas. The spa was demolished in 1882, although a water fountain was left behind.

Hampstead started to expand following the opening of the North London Railway in the 1860s (now the London Overground with passenger services operated by Transport for London), and expanded further after the Charing Cross, Euston & Hampstead Railway opened in 1907 (now part of London Underground's Northern line) and provided fast travel to central London.

Much luxurious housing was created during the 1870s and 1880s, in the area that is now the political ward of Frognal & Fitzjohns. Much of this housing remains to this day.

In the 20th century, a number of notable buildings were created including:

Keats House, Hampstead, where Keats wrote his Ode to a Nightingale

On 14 August 1975 Hampstead entered the UK Weather Records with the Highest 155-min total rainfall at 169 mm. As of November 2008 this record remains. 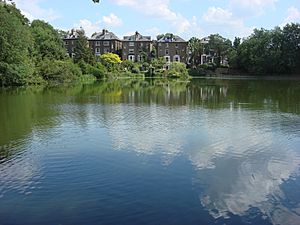 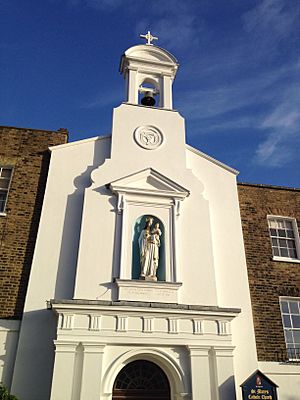 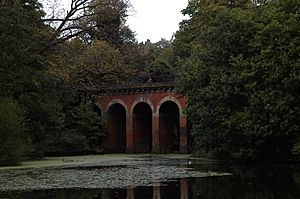 The Viaduct on Hampstead Heath 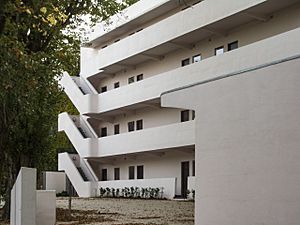 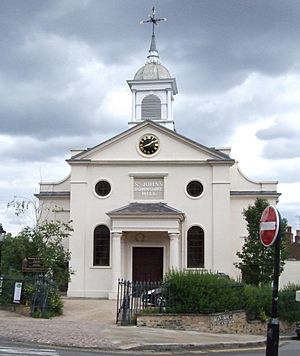 To the north and east of Hampstead, and separating it from Highgate, is London's largest ancient parkland, Hampstead Heath, which includes the well-known and legally-protected view of the London skyline from Parliament Hill. The Heath, a major place for Londoners to walk and "take the air", has three open-air public swimming ponds; one for men, one for women, and one for mixed bathing, which were originally reservoirs for drinking water and the sources of the River Fleet. The bridge pictured is known locally as 'The Red Arches' or 'The Viaduct', built in fruitless anticipation of residential building on the Heath in the 19th century.

The largest employer in Hampstead is the Royal Free Hospital, Pond Street, but many small businesses based in the area have international significance. George Martin's AIR recording studios, in converted church premises in Lyndhurst Road, is a current example, as Jim Henson's Creature Shop was before it relocated to California.

The area has some remarkable architecture, such as the Isokon building in Lawn Road, a Grade I listed experiment in collective housing, once home to Agatha Christie, Henry Moore, Ben Nicholson and Walter Gropius. It was recently restored by Notting Hill Housing Trust.

Hampstead is well known for its traditional pubs, such as The Holly Bush, gas-lit until recently; the Spaniard's Inn, Spaniard's Road, where highwayman Dick Turpin took refuge; The Old Bull and Bush in North End; and The Old White Bear (formerly Ye Olde White Bear). Jack Straw's Castle, on the edge of the Heath near Whitestone Pond, has now been converted into residential flats. Others include:

Hampstead has an eclectic mix of restaurants ranging from French to Thai. Notable and longstanding are La Gaffe, Gaucho Grill, Jin Kichi, Tip Top Thai, Villa Bianca and, in May 2016, Patara. After over a decade of controversy and legal action from local residents, McDonald's was finally allowed to open in Hampstead in 1992, after winning its right in court, and agreeing to a previously unprecedented re-design of the shop front, reducing the conspicuousness of its facade and logo, but closed in November 2013. 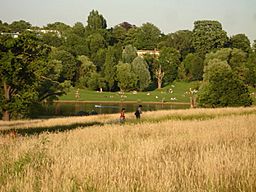 Hampstead's rural feel lends itself for use on film; a notable example being The Killing of Sister George (1968) starring Beryl Reid and Susannah York. The opening sequence has Reid's character June wandering through the streets and alleyways of Hampstead, west of Heath Street, around The Mount Square. The Marquis of Granby pub, in which June drinks at the opening of the film, was actually The Holly Bush, at 22 Holly Mount. Another example is The Collector (1965), starring Terence Stamp and Samantha Eggar, where the kidnap sequence is set in Mount Vernon.

Some scenes from An American Werewolf in London (1981) are shot on Hampstead Heath, Well Walk and Haverstock Hill.

More recently Kenwood House is the set of the "film-within-the-film" scene of Notting Hill (1999). Outdoor scenes in The Wedding Date (2005), starring Debra Messing, feature Parliament Hill Fields on the Heath, overlooking west London. Parliament Hill also features in Notes on a Scandal (2006) together with the nearby areas of Gospel Oak and Camden Town. Four Weddings and a Funeral (1994) features the old Hampstead Town Hall on Haverstock Hill.

A musical specifically focusing on the area, Les Bicyclettes de Belsize (1968), tells the story of a young man's cycle journey around Hampstead. After crashing into a billboard poster, he falls in love with the fashion model depicted on it. 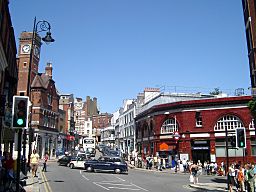 Hampstead has a major bus terminus known as Hampstead Heath located in South End Green. Its most frequent service is Route 24 which for over 100 years has linked this area with the West End, Victoria and Grosvenor Road in Pimlico. Bus routes that currently serve Hampstead are: 24 46 168 210 268 603 C11 and N5.

The nearest London Underground stations are Hampstead and Belsize Park on the Northern line and Swiss Cottage and Finchley Road on the Jubilee line. The stations are within Travelcard Zone 2. Hampstead is the boundary with Travelcard Zone 3. Construction of North End tube station was started but not completed.

Hampstead Heath railway station is situated by South End Green while Finchley Road & Frognal station is on the western side of Hampstead. Both stations are part of the London Overground network.

All content from Kiddle encyclopedia articles (including the article images and facts) can be freely used under Attribution-ShareAlike license, unless stated otherwise. Cite this article:
Hampstead Facts for Kids. Kiddle Encyclopedia.