Camden Town, often shortened to Camden (ambiguously also used for the much larger London Borough of Camden of which it is the central neighbourhood), is an inner city district of northwest London, 2.4 miles (3.9 km) north of the centre of London. It is one of the 35 major centres identified in the London Plan.

Laid out as a residential district from 1791 and originally part of the manor of Kentish Town and the parish of St Pancras, London, Camden Town became an important location during the early development of the railways, which reinforced its position on the London canal network. The area's industrial economic base has been replaced by service industries such as retail, tourism and entertainment. The area now hosts street markets and music venues which are strongly associated with alternative culture.

Camden Town is named after Charles Pratt, 1st Earl Camden. His earldom was styled after his estate, Camden Place near Chislehurst in Kent (now in the London Borough of Bromley), formerly owned by historian William Camden. The name, which appears on the Ordnance Survey map of 1822, was later applied to the early 20th century Camden Town Group of artists and the London Borough of Camden, created in 1965.

Camden Town stands on land which was once the manor of Kentish Town. Sir Charles Pratt, a radical 18th century lawyer and politician, acquired the manor through marriage. In 1791, he started granting leases for houses to be built in the manor. In 1816, the Regent's Canal was built through the area. Up to at least the mid 20th century, Camden Town was considered an "unfashionable" locality. The Camden markets, which started in 1973 and have grown since then, attract many visitors all week. Camden Lock Village, then known as Camden Lock market, suffered a major fire, but no injuries, on 9 February 2008. It has since recovered.

Camden Town is on relatively flat ground at 100 feet (30 m) above sea level, 2.4 miles (3.9 km) north-northwest of Charing Cross. To the north are the hills of Hampstead and Highgate. The culverted, subterranean River Fleet flows from its source on Hampstead Heath through Camden Town south to the Thames. The Regent's Canal runs through the north of Camden Town. 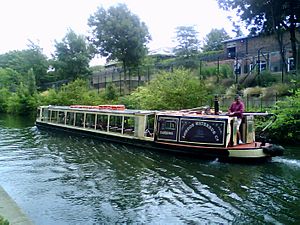 Camden Town Tube station is near the markets and other attractions. It is a key interchange station for the Bank, Charing Cross, Edgware and High Barnet Northern line branches. The station was not designed to cope with the volume of traffic it handles since the area increased in popularity. It is very crowded at weekends, and, as of 2011[update], is closed to outbound passengers on Sunday afternoons for safety reasons. London Underground has made many proposals to upgrade the station. In 2004 a proposal requiring the compulsory purchase and demolition of 'the Triangle'—land bordered by Kentish Town Road, Buck Street and Camden High Street—was rejected by Camden Council after opposition from local people; of 229 letters, only two supported the scheme. Chalk Farm and Mornington Crescent tube stations also serve the area.

Camden Town tube station is exit-only at times when market-related traffic would cause dangerous overcrowding on the narrow platforms; as of 2014[update] on Sundays from 13:00 to 17:30. At these times, TfL advises tube users to use the nearest alternative station, Mornington Crescent, instead.

Camden Road is a London Overground station at the corner of Royal College Street and Camden Road. It is on the line from Richmond in the West to Stratford station on the Olympic site in the East. The nearest National Rail station is Kentish Town on the Thameslink route on the Midland Main Line. St Pancras and Euston terminals are both within 20 minutes walk of Camden Town. 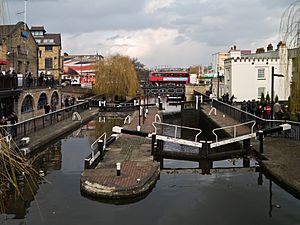 The area is a major hub for London Buses. Parts of the A503 (Camden Road) and A400 (Camden High Street and Camden Street) are designated as red routes on which vehicles may not stop for any reason, managed by Transport for London rather than the borough. Black taxis ply for hire in the area and there are minicab offices. 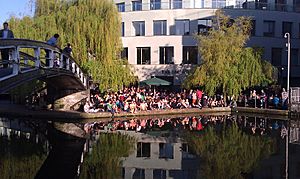 A warm summer day at the Camden Lock

The Regent's Canal runs through the north end of Camden Town. Canal boat trips along the canal from Camden Lock are popular, particularly in summer. Many of the handrails by the bridges show deep marks worn by the towropes by which horses pulled canal barges until the 1950s, and it is still possible to see ramps on the canal bank designed to assist horses which fell in the canal after being startled by the noise of a train. Camden Lock is a regularly used traditional manually operated double canal lock operating between widely separated levels. A large complex of weekend street markets operate around the Lock. The towpath is a pedestrian and cycle route which runs continuously from Little Venice through Camden Lock to the Islington Tunnel A regular waterbus service operates along the Regent's Canal from Camden Lock. Boats depart every hour during the summer months, heading westwards around Regent's Park, calling at London Zoo and on towards Maida Vale. Sightseeing narrow-boat trips run from Camden Lock to Little Venice. 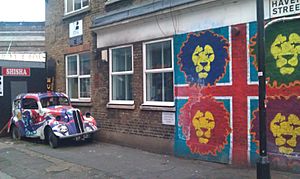 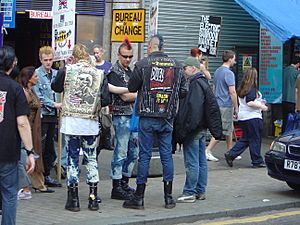 Punks close to the Electric Ballroom 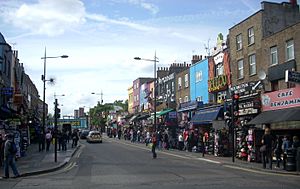 The Roundhouse is a locomotive engine roundhouse constructed in 1847 for the London & North Western Railway. It later had various uses and eventually became derelict. It was converted to a theatre, arts centre and music venue in the 1966, later closed, and re-opened in 2006 as a theatre and music venue.

All content from Kiddle encyclopedia articles (including the article images and facts) can be freely used under Attribution-ShareAlike license, unless stated otherwise. Cite this article:
Camden Town Facts for Kids. Kiddle Encyclopedia.