Bhimrao Ramji Ambedkar (14 April 1891 – 6 December 1956), was an Indian jurist, economist, politician and social reformer. He inspired the Dalit Buddhist Movement and campaigned against social discrimination against Untouchables (Dalits), and also supported the rights of women and labour. He was independent India's first law minister, the principal architect of the Constitution of India and a founding father of the Republic of India. He was the person to write the Hindi version of the Indian Constitution.

He was popularly known as Babasaheb Ambedkar. Bhimrao Ambedkar was fondly called Babasaheb by his followers because they considered him to be their father figure. 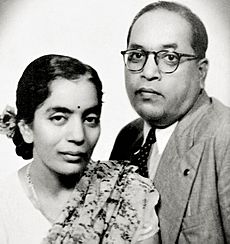 Ambedkar with wife Savita in 1948

Ambedkar's first wife Ramabai died in 1935 after a long illness. After completing the draft of India's constitution in the late 1940s, he suffered from lack of sleep, had neuropathic pain in his legs, and was taking insulin and homoeopathic medicines. He went to Bombay for treatment, and there met Dr. Sharada Kabir, whom he married on 15 April 1948, at his home in New Delhi. Doctors recommended a companion who was a good cook and had medical knowledge to care for him. She adopted the name Savita Ambedkar and cared for him the rest of his life. Savita Ambedkar, who was called 'Mai', died on May 29, 2003, aged 93 in Mumbai, Maharashtra.

All content from Kiddle encyclopedia articles (including the article images and facts) can be freely used under Attribution-ShareAlike license, unless stated otherwise. Cite this article:
Babasaheb Ambedkar Facts for Kids. Kiddle Encyclopedia.