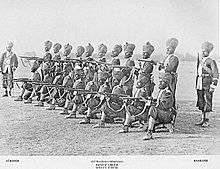 The British Indian Army, officially called simply the Indian Army (IA), was the army in British India during British rule (1858–1947). The Indian Army served as a security force in India itself and fought in battles overseas, particularly during the two World Wars.

The Army of India defeated the Ottoman Empire and conquered Iraq in the Mesopotamian Campaign of World War I. 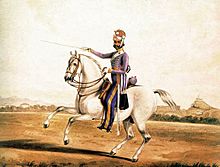 The Indian Army was formed after the Indian Rebellion of 1857 when the government of Britain took over rule from the British East India Company. Before that the Company had their own army units, paid for by their profits and these joined with British Army units.

The army of the British East India Company recruited mostly Muslims in the Bengal Presidency (which consisted of Bengal, Bihar and Uttar Pradesh), and high caste Hindus mainly from the rural plains of Oudh. These troops rebelled against the British in 1857.

After World War II, the British formations and units that had been part of the British Army of India were divided between India and Pakistan.

Soon after the Partition of India, both the newly formed armies fought each other in the First Kashmir War from 1947 - '48 which begun the bitter rivalry that has continued into the 21st century.

All content from Kiddle encyclopedia articles (including the article images and facts) can be freely used under Attribution-ShareAlike license, unless stated otherwise. Cite this article:
British Indian Army Facts for Kids. Kiddle Encyclopedia.