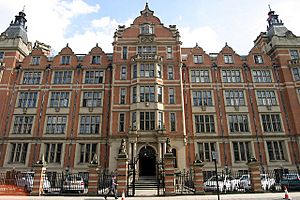 The London School of Economics and Political Science (more commonly London School of Economics or LSE) is a college of the University of London in Westminster. The college opened in 1895. It joined the University of London in 1900. Today it is one of the leading universities for Law, Economics and Political Sciences. QS ranked it as the second best university in the world for social science in 2013.

Some of the most notable people who attended the college are:

It is a member of the Russell Group. In 2011 17,654 people applied for 1,271 undergraduate places. This means there were 13.8 applicants for every place. Over half of LSE's students are postgraduates. 16 Nobel Prize winners have been LSE students or staff. It has the highest percentage of students from another country in the world and 46% of staff are from other countries.

All content from Kiddle encyclopedia articles (including the article images and facts) can be freely used under Attribution-ShareAlike license, unless stated otherwise. Cite this article:
London School of Economics Facts for Kids. Kiddle Encyclopedia.