Deuba began his student political career in 1965 aged 19. He served as the president of the Far-western Students' Committee, Kathmandu from 1965 to 1968. Deuba was a founding member of the Nepal Student Union, a sister organization of the Nepali Congress. He was jailed intermittently for nine years for working against the Panchayat system in the 1960s and 1970s. He also served as a co-ordinator of the Political Advisory Committee of Nepali Congress in the 1980s. 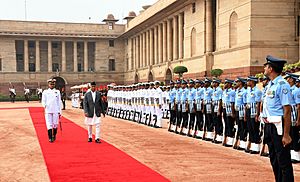 Deuba inspecting a Guard of Honour at ceremonial reception in his honour at the Rashtrapati Bhavan, New Delhi

After the 1990 People's Movement, Deuba was elected to the House of Representatives from Dadeldhura–1 in 1991; a seat he has held in every election since. He served as the Minister of Home Affairs in the cabinet led by Girija Prasad Koirala. After Koirala dissolved the parliament and his government was defeated in the 1994 mid-term elections, Deuba was elected parliamentary party leader of the Nepali Congress. After Manmohan Adhikari tried to dissolve the parliament again in 1995 which was declared unconstitutional by the Supreme Court, Deuba was appointed Prime Minister in 1995 and led a coalition government with the Rastriya Prajatantra Party. His administration, which witnessed the beginning of the Maoist insurgency, fell in March 1997 and he was succeeded by Lokendra Bahadur Chand who led a minority coalition government.

Following the resignation of Girija Prasad Koirala as prime minister, Deuba defeated Sushil Koirala to become the parliamentary party leader of the Nepali Congress and was appointed Prime Minister for a second time in July 2001. His second stint as prime minister began shortly after the royal massacre and during the heights of the Maoist insurgency, and Deuba's primary task was to hold negotiations with the rebels. After the Maoists pulled out of talks and attacked the army in November 2001, Deuba's handling of the crisis came under fire. In early 2002, the central committee of the Nepali Congress instructed Deuba not to renew the state of emergency. Deuba responded in May 2002 by requesting a dissolution of the parliament in order to hold fresh elections and set up his own breakaway party, the Nepali Congress (Democratic) party. In October 2002, when Deuba sought the postponement of the elections, King Gyanendra dismissed him for being incompetent. After two other governments in two years, Gyanendra reappointed Deuba as Prime Minister in 2004. But soon after, he was again removed from office on 1 February 2005 by the king, who suspended the constitution and assumed direct authority. Deuba was sentenced to two years in prison in July 2005 under corruption charges but was subsequently released on 13 February 2006 after the anti-corruption body that sentenced him was outlawed. In September 2007, Deuba dissolved his splinter party and rejoined the Nepali Congress. 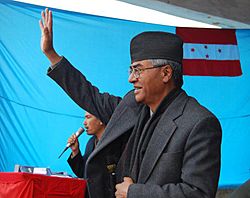 In the Constituent Assembly election held on 10 April 2008, Deuba was nominated by the Nepali Congress as its candidate for both Dadeldhura–1 and Kanchanpur–4 constituencies. He won from both the constituencies, and gave up his Kanchanpur–4 seat, where he was replaced by Harish Thakulla of the Unified Communist Party of Nepal (Maoist), who he defeated in the general election, after a by–election.

In the subsequent vote for prime minister held in the Constituent Assembly on 15 August 2008, Deuba was nominated as the Nepali Congress' candidate, but was defeated by Pushpa Kamal Dahal of the UCPN (Maoist). Deuba received 113 votes, while Dahal received 464.

In the 23rd Congress of the Socialist International held in Athens, Greece in 2008, Deuba was elected vice–president of the organization, serving until 2012.

In 2009, after the fall of the Dahal-led government and the ailing health of party president Girija Prasad Koirala, Deuba put up his candidacy to become the parliamentary party leader of the Nepali Congress in a bid to become the prime minister again, but was defeated by Ram Chandra Poudel.

After the death of Sushil Koirala, Deuba was elected president of the Nepali Congress at the party's thirteenth general convention defeating his intra-party rival, Ram Chandra Poudel, receiving almost 60% of the votes cast.

In August 2016, Deuba struck a deal with Pushpa Kamal Dahal to lead a coalition government of the Nepali Congress and the CPN (Maoist Centre) for nine months each in the lead to the general elections in late 2017. As per the agreement, he was sworn in as Prime Minister for a fourth stint on 7 June 2017. Deuba was in charge of the government that successfully conducted elections of all three levels (parliamentary, provincial and local) in different phases in 2017. He resigned on 15 February 2018, paving way for KP Sharma Oli, leader of the Communist Party of Nepal (UML), the largest party in the 2017 polls, to become prime minister.

He has been elected to the Pratinidhi Sabha from Dadeldhura–1 in 1991, 1994, 1999 and 2017 on a Nepali Congress ticket. He won from Dadeldhura–1 in both the 2008 and 2013 Constituent Assembly elections. He contested and won from two constituencies in the 2008 CA election and gave up his Kanchanpur–4 seat. Only the top two candidates are shown below.

Deuba was born in Ashigram, a remote village in Dadeldhura district of far-western Nepal (present–day Ganyapdhura rural municipality). He is married to Dr. Arzu Rana Deuba.

Deuba has a Bachelor of Arts and Law degree and holds a master's degree in Political Science. In November 2016, Deuba was conferred an honorary doctorate degree by Jawaharlal Nehru University in India.

All content from Kiddle encyclopedia articles (including the article images and facts) can be freely used under Attribution-ShareAlike license, unless stated otherwise. Cite this article:
Sher Bahadur Deuba Facts for Kids. Kiddle Encyclopedia.