Bidya Devi Bhandari (Nepali: विद्यादेवी भण्डारी born 19 June 1961) is a Nepalese politician, serving as the 2nd President of Nepal, in office since 28 October 2015. She is the first woman to hold the office in the country. She was elected in a parliamentary vote, receiving 327 votes out of 549 against Kul Bahadur Gurung, the presidential candidate of the Nepali Congress. She previously served as the vice-chairperson of the Communist Party of Nepal (Unified Marxist–Leninist) and was the chair of the All Nepal Women's Association before being elected president.

She previously served as the Minister of Defence, the first woman to hold the office, in the Madhav Kumar Nepal government. She also served as the Minister of Environment and Population in 1997, and has been an active campaigner for environmental awareness and women rights in Nepal. In June 2017, she visited the headquarters of the IUCN in Gland, Switzerland and met with the director general Inger Andersen to discuss about enhanced collaboration on nature conservation and sustainable development. In 2016, Forbes placed her on number 52 in their list of the world's 100 most powerful women.

Bhandari was born on 19 June 1961, in Mane Bhanjyang, Bhojpur, to Ram Bahadur Pandey and Mithila Pandey. Her political career began from a leftist student union. She joined the Communist Party of Nepal (Marxist–Leninist) in 1980. 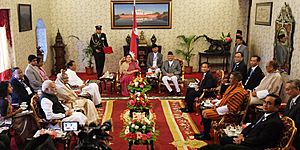 Meeting with the BIMSTEC leaders in Kathmandu, Nepal on August 30, 2018

Bhandari was active in politics from an early age. According to the details provided by the CPN-UML, Bhandari joined politics as an activist of the Youth League of CPN(ML) in 1978, from Bhojpur. She played a role as an in-charge for Eastern Zone Committee of ANNFSU from 1979 to 1987. Her active political journey, however, started when she received party membership from the CPN (ML) in 1980. After completing her school level study, Bhandari was enrolled in Mahendra Morang Adarsha Multiple Campus where she was elected treasurer of the students' union. Also, she played a pivotal role as a chairperson of the women's wing of GEFONT from 1993 before being elected a central committee member of the CPN–UML in 1997.

Bhandari was elected twice in parliamentary elections in 1994 and 1999, defeating former Prime Minister Krishna Prasad Bhattarai and Damanath Dhungana, respectively. However, she lost in the 2008 Constituent Assembly poll, and was then nominated under the proportional electoral system. She served as the Minister of Defense in the cabinet of Prime Minister Madhav Kumar Nepal. She was re-elected under the proportional electoral system in the second Constituent Assembly elections in 2013. Her influence in the party remained dominant when she was elected as vice-chairperson of the CPN–UML in its eighth general convention held in Butwal. Bhandari, who was re-elected vice-chairperson in the party's next general convention, is considered a close confidante to party chairman and Prime Minister KP Sharma Oli.

Bhandari was married to Madan Bhandari, a popular Nepalese communist leader, who died in a car accident near Dasdhunga in Nepal's Chitwan District in 1993. The couple have two daughters, Usha Kiran Bhandari and Nisha Kusum Bhandari. She is also related to Nepali Congress leader Gyanendra Bahadur Karki.

All content from Kiddle encyclopedia articles (including the article images and facts) can be freely used under Attribution-ShareAlike license, unless stated otherwise. Cite this article:
Bidya Devi Bhandari Facts for Kids. Kiddle Encyclopedia.