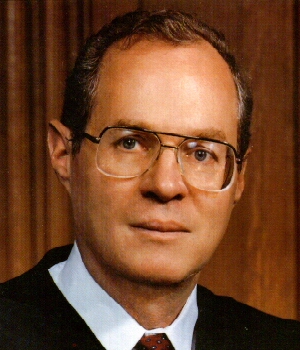 Anthony Kennedy is on the Supreme Court of the United States. He was made a judge on that court in 1988.

Kennedy was born in Sacramento, California, on July 23, 1936. He went to Harvard University, Stanford University, and the London School of Economics. He was a private lawyer, a professor, and in 1975, he was appointed by Gerald Ford to the Ninth Circuit Court of Appeals. In 1988, Ronald Reagan nominated him for the Supreme Court. He became a member of the court on February 18, 1988. He has two sons and a daughter.

All content from Kiddle encyclopedia articles (including the article images and facts) can be freely used under Attribution-ShareAlike license, unless stated otherwise. Cite this article:
Anthony Kennedy Facts for Kids. Kiddle Encyclopedia.