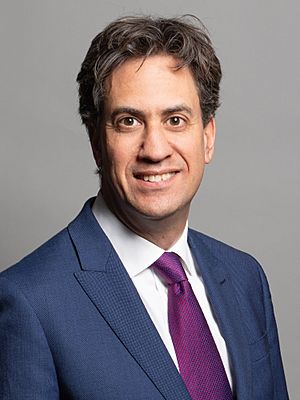 Edward Samuel Miliband MP (born 24 December 1969) is a British politician. He was the leader of the Labour Party and of the Official Opposition. He is also the Labour Member of Parliament (MP) for the constituency of Doncaster North, and is a former cabinet minister.

He was born in University College Hospital, Bloomsbury, London and raised in Primrose Hill. His parents were Polish-Jewish immigrants. He is the younger son of the Marxist thinker Ralph Miliband. At the London School of Economics, he obtained a Master's degree in Economics, and then became an advisor to Labour politicians such as Harriet Harman and Gordon Brown. At the 2005 general election, he was elected to be the MP for Doncaster North. His first job in government was as the Secretary of State for Energy and Climate Change, which he took up on October 3, 2008 and remained as until Labour lost the 2010 General Election.

In September 2010, he defeated his brother David Miliband by a small number of votes to become leader of the Labour Party.

He resigned as leader in May 2015 after Labour lost to the Conservative Party in the 2015 General Election. Jeremy Corbyn replaced him.

All content from Kiddle encyclopedia articles (including the article images and facts) can be freely used under Attribution-ShareAlike license, unless stated otherwise. Cite this article:
Ed Miliband Facts for Kids. Kiddle Encyclopedia.