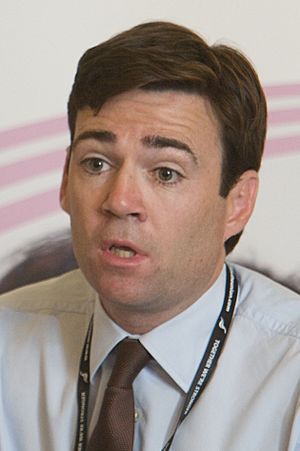 Andrew Murray Burnham (born 7 January 1970) is an English politician. He was a candidate in the 2010 Labour leadership election. As of 2012 Burnham was Shadow Secretary of State for Health within Ed Miliband's Shadow Cabinet. He is the Member of Parliament for the Leigh constituency in the United Kingdom. He was first elected in the 2001 general election.

Burnham was born in Old Roan, Aintree, Lancashire and raised in Culcheth, Warrington.

On 5 May 2017, he was elected mayor of Greater Manchester.

All content from Kiddle encyclopedia articles (including the article images and facts) can be freely used under Attribution-ShareAlike license, unless stated otherwise. Cite this article:
Andy Burnham Facts for Kids. Kiddle Encyclopedia.