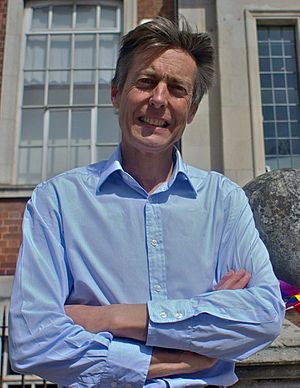 Benjamin Peter James Bradshaw (born 30 August 1960) is an English politician and the Member of Parliament for the Exeter constituency in the United Kingdom. He was elected in the 1997 general election.

He was a Minister of State in the Department of Health, a Minister for the South West and Secretary of State for Culture, Media and Sport. He holds no posts in the current shadow government.

All content from Kiddle encyclopedia articles (including the article images and facts) can be freely used under Attribution-ShareAlike license, unless stated otherwise. Cite this article:
Ben Bradshaw Facts for Kids. Kiddle Encyclopedia.