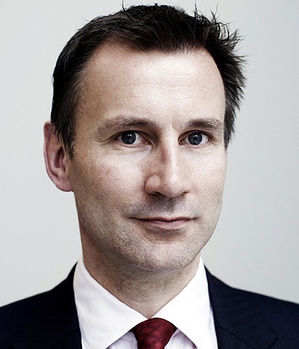 Jeremy Richard Streynsham Hunt MP (born November 1, 1966) is an English politician. He was born in Kennington, London. He is the Member of Parliament for South West Surrey was the Secretary of State for Health from 2012 - 2018. He was first elected in the 2005 general election.

In July 2018 Hunt became the Foreign Secretary after Boris Johnson resigned from the government.

He gained a Bachelor of Arts degree in Philosophy, Politics and Economics from Magdalen College, Oxford. He is a member of the Conservative Party.

On 24 May 2019, Hunt announced his campaign to run for Leader of the Conservative Party in the 2019 election. On 20 June, Hunt and Boris Johnson became the final two candidates in the contest. He lost the election to Johnson on 22 July. He later quit as Foreign Secretary.

All content from Kiddle encyclopedia articles (including the article images and facts) can be freely used under Attribution-ShareAlike license, unless stated otherwise. Cite this article:
Jeremy Hunt Facts for Kids. Kiddle Encyclopedia.