Kids Encyclopedia Facts
This page is about the area in London. For other uses, see Pimlico (disambiguation).

Pimlico is a small area within central London in the City of Westminster. Like Belgravia, to which it was built as a southern extension, Pimlico is known for its garden squares and Regency architecture.

The area is separated from Belgravia to the north by Victoria Railway Station, and bounded by the River Thames to the south, Vauxhall Bridge Road to the east and the former Grosvenor Canal to the west.

At Pimlico's heart is a grid of residential streets laid down by the planner Thomas Cubitt beginning in 1825, and now protected as the Pimlico Conservation Area. Pimlico is also home to the pre-World War II Dolphin Square development and the pioneering Churchill Gardens and Lillington and Longmoore Gardens estates, now designated conservation areas in their own right. The area has over 350 Grade II listed buildings and several Grade II* listed churches.

Early history and origin of name 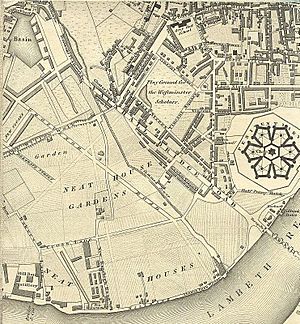 In the sixteenth and seventeenth centuries, the Manor of Ebury was divided up and leased by the Crown to servants or favourites. In 1623, James I sold the freehold of Ebury for £1,151 and 15 shillings. The land was sold on several more times, until it came into the hands of heiress Mary Davies in 1666.

Mary's dowry not only included "The Five Fields" of modern-day Pimlico and Belgravia, but also most of what is now Mayfair and Knightsbridge. Understandably, she was much pursued but in 1677, at the age of twelve, married Sir Thomas Grosvenor. The Grosvenors were a family of Norman descent long seated at Eaton Hall in Cheshire who until this auspicious marriage were but of local consequence in their native county of Cheshire. Through the development and good management of this land the Grosvenors acquired enormous wealth.

At some point in the late seventeenth or early eighteenth century, the area ceased to be known as Ebury or "The Five Fields" and gained the name by which it is now known. While its origins are disputed, it is "clearly of foreign derivation.... Gifford, in a note in his edition of Ben Jonson, tells us that 'Pimlico is sometimes spoken of as a person, and may not improbably have been the master of a house once famous for ale of a particular description." Supporting this etymology, Rev. Brewer describes the area as "a district of public gardens much frequented on holidays. According to tradition, it received its name from Ben Pimlico, famous for his nut-brown ale. His tea-gardens, however, were near Hoxton, and the road to them was termed Pimlico Path, so that what is now called Pimlico was so named from the popularity of the Hoxton resort".

H.G. Wells, in his novel The Dream, says that there was a wharf at Pimlico where ships from America docked and that the word Pimlico came with the trade and was the last word left alive of the Algonquin Indian language (Pamlico). 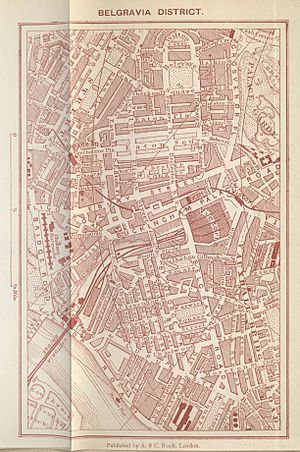 Belgravia and Pimlico in 1903

By the nineteenth century, and as a result of an increase in demand for property in the previously unfashionable West End of London following the Great Plague of London and the Great Fire of London, Pimlico had become ripe for development. In 1825, Thomas Cubitt was contracted by Lord Grosvenor to develop Pimlico. The land up to this time had been marshy but was reclaimed using soil excavated during the construction of St Katharine Docks.

Cubitt developed Pimlico as a grid of handsome white stucco terraces. The largest and most opulent houses were built along St George's Drive and Belgrave Road, the two principal streets, and Eccleston, Warwick and St George's Squares. Lupus Street contained similarly grand houses, as well as shops and, until the early twentieth century, a hospital for women and children. Smaller-scale properties, typically of three storeys, line the side streets. An 1877 newspaper article described Pimlico as "genteel, sacred to professional men… not rich enough to luxuriate in Belgravia proper, but rich enough to live in private houses." Its inhabitants were "more lively than in Kensington… and yet a cut above Chelsea, which is only commercial."

Although the area was dominated by the well-to-do middle and upper-middle classes as late as Booth's 1889 Map of London Poverty, parts of Pimlico are said to have declined significantly by the 1890s. When Rev Gerald Olivier moved to the neighbourhood in 1912 with his family, including the young Laurence Olivier, to minister to the parishioners of St Saviour, it was part of a venture to west London "slums" that had previously taken the family to the depths of Notting Hill.

Proximity to the Houses of Parliament made Pimlico a centre of political activity. Prior to 1928, the Labour Party and Trades Union Congress shared offices on Eccleston Square, and it was here in 1926 that the general strike was organised.

In the mid-1930s Pimlico saw a second wave of development with the construction of Dolphin Square, a self-contained "city" of 1250 up-market flats built on the site formerly occupied by Cubitt's building works. Completed in 1937, it quickly became popular with MPs and public servants. It was home to fascist Oswald Mosley until his arrest in 1940, and the headquarters of the Free French for much of the Second World War.

Pimlico survived the war with its essential character intact, although parts sustained significant bomb damage. Through the 1950s these areas were the focus of large-scale redevelopment as the Churchill Gardens and Lillington and Longmoore Gardens estates, and many of the larger Victorian houses were converted to hotels and other uses.

To provide affordable and efficient heating to the residents of the new post-war developments, Pimlico became one of the few places in the UK to have a district heating system installed. District heating became popular after World War II to heat the large residential estates that replaced areas devastated by the Blitz. The Pimlico District Heating Undertaking (PDHU) is just north of the River Thames. The PDHU first became operational in 1950 and continues to expand to this day. The PDHU once relied on waste heat from the now-disused Battersea Power Station on the South side of the River Thames. It is still in operation, the water now being heated locally by a new energy centre which incorporates 3.1 MWe /4.0 MWTh of gas-fired CHP engines and 3 × 8 MW gas-fired boilers.

In 1953, the Second Duke of Westminster sold the part of the Grosvenor estate on which Pimlico is built.

Pimlico was connected to the underground in 1972 as a late addition to the Victoria line. Following the designation of a conservation area in 1968 (extended in 1973 and again in 1990), the area has seen extensive regeneration. Successive waves of development have given Pimlico an interesting social mix, combining exclusive restaurants and residences with Westminster City Council run facilities. 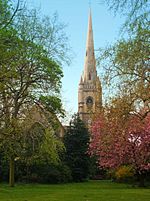 Dolphin Square is a block of private apartments built between 1935 and 1937. At the time of their construction the development was billed as the largest self-contained block of flats in Europe. It is home to many Members of Parliament.

Churchill Gardens is a large housing estate covering the south-west corner of Pimlico. It was developed between 1946 and 1962 to a design by the architects Powell and Moya, replacing docks, industrial works, and several Cubitt terraces damaged in the Blitz.

On Buckingham Palace Road is the former "Empire Terminal" of Imperial Airways, a striking Art Moderne building designed in 1938 by architect Albert Lakeman. Mail, freight and passengers were transported from the terminal to Southampton via rail before transferring to flying boats. The building now serves as the headquarters of the National Audit Office.

The area contains a number of attractive Anglican churches, most constructed at the time the neighbourhood was laid down. Among them are St Gabriel's, St Saviour and St James the Less. From its founding St Peter's, Eaton Square, Pimlico was usually recorded as St Peter's, Pimlico (at least prior to 1878). The area's Catholic church, Holy Apostles, was destroyed in the Blitz and rebuilt in 1957. The headquarters of the Catholic Bishops' Conference of England and Wales are located in Eccleston Square.

Tate Britain is located within the ward of Millbank, but is a short walk from Pimlico underground station and is regarded as a Pimlico landmark. The district's association with fine art has been reinforced by the Chelsea College of Art and Design's recent move to the former Royal Army Medical College next to the Tate.

Pimlico School, a comprehensive built between 1967 and 1970, was a notable example of Brutalist architecture. It was demolished in 2010.

Pimlico is the setting of the 1940 version of Gaslight.

Post-World War II Pimlico was the setting of the Ealing comedy Passport To Pimlico.

In G. K. Chesterton's Orthodoxy, Pimlico is used as an example of "a desperate thing." Arguing that things are not loved because they are great but become great because they are loved, he asserts that if merely approved of, Pimlico "will remain Pimlico, which would be awful," but if "loved with a transcendental tie and without any earthly reason" it "in a year or two might be fairer than Florence."

The area is the home of Francis Urquhart in Michael Dobbs's 1989 novel, House of Cards. 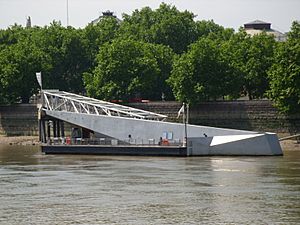 Pimlico is served by Pimlico station on the Victoria line and Victoria station on the Victoria, District and Circle lines. It is also served by National Rail services to London Victoria Station. Bus routes that run centrally through Pimlico are the 24, 360, and the C10. Many more buses run along Vauxhall Bridge Road to the East of Pimlico. Riverboat services to Waterloo and Southwark run from Millbank Millennium Pier.

The area has a dozen docking stations for the Santander Cycles scheme.

Pimlico would be connected at Victoria to the proposed Chelsea-Hackney line (Crossrail 2). Plans under consideration for the redevelopment of Nine Elms and Battersea Power Station include a pedestrian bridge stretching across the river from St George's Square; in 2015, Wandsworth council awarded Bystrup and partners the design for the £40m bridge, with spiral ramps preserving parks at both ends.

All content from Kiddle encyclopedia articles (including the article images and facts) can be freely used under Attribution-ShareAlike license, unless stated otherwise. Cite this article:
Pimlico Facts for Kids. Kiddle Encyclopedia.