Alexander "Sandy" McCall Smith, CBE, FRSE (born 24 August 1948), is a British writer. He was raised in Southern Rhodesia (now Zimbabwe) and formerly Professor of Medical Law at the University of Edinburgh. He became an expert on medical law and bioethics and served on related British and international committees. He has since become known as a fiction writer, with sales in English exceeding 40 million by 2010 and translations into 46 languages. He is known as the creator of The No. 1 Ladies' Detective Agency series. The "McCall" derives from his great-great-grandmother Bethea McCall, who married James Smith at Glencairn, Dumfries-shire, in 1833.

Alexander McCall Smith was born in 1948 in Bulawayo in the British colony of Southern Rhodesia (present-day Zimbabwe), to British parents. He was the only son, having three elder sisters. His father worked as a public prosecutor in Bulawayo. McCall Smith's paternal grandfather was the medical doctor and New Zealand community leader George Marshall McCall Smith, born at Nairn in Scotland. McCall Smith was educated at the Christian Brothers College in Bulawayo before moving to Scotland at age 17 to study law at the University of Edinburgh, where he earned his LLB and PhD degrees. He soon taught at Queen's University Belfast, and while teaching there he entered a literary competition: one a children's book and the other a novel for adults. He won in the children's category. 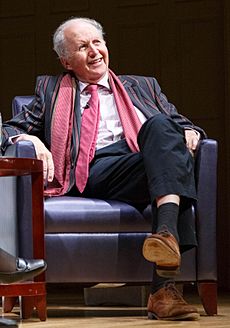 McCall Smith speaking at the Library of Congress in 2019

He returned to southern Africa in 1981 to help co-found the law school and teach law at the University of Botswana. While there, he co-wrote The Criminal Law of Botswana (1992).

He was Professor of Medical Law at the University of Edinburgh and is now Emeritus Professor at its School of Law. He retains a further involvement with the university in relation to the James Tait Black Memorial Prize.

He settled in Edinburgh, Scotland, in 1984. He and his wife Elizabeth, a physician, bought and renovated a large Victorian mansion in the Merchiston/Morningside area of the city. They lived there for almost 30 years, raising their two daughters. Nearby lived the authors J. K. Rowling, Ian Rankin, and Kate Atkinson.

An amateur bassoonist, he co-founded The Really Terrible Orchestra. He has helped to found Botswana's first centre for opera training, the Number 1 Ladies' Opera House, for whom he wrote the libretto of their first production, a version of Macbeth set among a troop of baboons in the Okavango Delta.

In 2009 he received the Golden Plate Award of the American Academy of Achievement presented by Awards Council member Archbishop Desmond Tutu at an awards ceremony at St. George's Cathedral in Cape Town, South Africa.

In 2012 he appeared in a documentary about the life and work of author W. Somerset Maugham, Revealing Mr. Maugham.

In 2014 McCall Smith purchased the Cairns of Coll, a chain of uninhabited islets in the Hebrides. He said, "I intend to do absolutely nothing with them, and to ensure that, after I am gone, they are held in trust, unspoilt and uninhabited, for the nation. I want them kept in perpetuity as a sanctuary for wildlife – for birds and seals and all the other creatures to which they are home."

During a visit to New Zealand in 2014 McCall Smith visited Rawene, where his grandfather, George McCall Smith, ran the hospital for 34 years and created the Hokianga area health service. 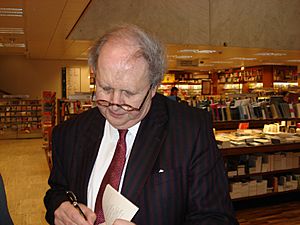 McCall Smith is a prolific author of fiction, with several series to his credit. He writes at a prodigious rate: "Even when travelling, he never loses a day, turning out between 2,000 and 3,000 words [a day] – but more like 5,000 words when at home in Edinburgh. His usual rate is 1,000 words an hour." He has gained the most fame for his No. 1 Ladies Detective Agency series, featuring Mma Precious Ramotswe and set in Gaborone, Botswana. The first novel was published in 1998. By 2009, the No 1 Ladies’ Detective Agency series had sold more than 20 million copies in English editions.

According to his publisher in Edinburgh, "He was, until 2005, a professor of medical law at the University of Edinburgh, but gave up the position to concentrate on his writing and now writes full time."

He published 30 books in the 1980s and 1990s before he began the series that has brought him the world's notice. In 2008 he wrote a serialised online novel Corduroy Mansions, with the audio edition read by Andrew Sachs made available at the same pace as the daily publication. He wrote more than ten chapters ahead of publication, finding the experience of serialised publication to be "a frightening thing to create a novel while his readers watched. 'I am like a man on a tightrope.'"

In 2009 he donated the short story "Still Life" to Oxfam's "Ox-Tales" project, comprising four collections of stories written by 38 British authors. McCall Smith's story was published in the "Air" collection.

All content from Kiddle encyclopedia articles (including the article images and facts) can be freely used under Attribution-ShareAlike license, unless stated otherwise. Cite this article:
Alexander McCall Smith Facts for Kids. Kiddle Encyclopedia.