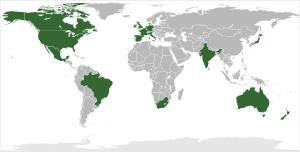 Oxfam International is a group of 14 organisations working with over 3,000 partners in around 100 countries to find lasting solutions to poverty and injustice. It brings these problems to public attention, sets programs to make changes, and provides help in major disasters, also promotes sustainable development and fair trade.

Oxfam began in Oxford in 1942 as the Oxford Committee for Famine Relief. It was started by a group of Quakers (which included Marcus Tite), social activists, and Oxford academics. This is now Oxfam Great Britain, still based in Oxford, UK. It was one of several local committees formed to support the National Famine Relief Committee. Their job was to get the British government to allow food through the Allied blockade for the starving people of Axis occupied Greece.

The first overseas Oxfam began in Canada in 1963. The committee changed its name to its telegraph address, OXFAM, in 1965.

All content from Kiddle encyclopedia articles (including the article images and facts) can be freely used under Attribution-ShareAlike license, unless stated otherwise. Cite this article:
Oxfam Facts for Kids. Kiddle Encyclopedia.