Joanne Rowling CH, OBE, FRSL, FRCPE, FRSE, ( "rolling"; born 31 July 1965), writing under the pen names J. K. Rowling and Robert Galbraith, is a British author. She wrote the Harry Potter books. She only uses the name J. K. Rowling for her books: the "K" stands for "Kathleen", which was the first name of her grandmother.

She earned a degree in French and Classics at the University of Exeter. She worked at Amnesty International in London.

The original idea for Harry Potter came to her on a train that was delayed for four hours in 1990.

She moved to Portugal to teach English in 1990. She married Jorge Arantes in October 1992. They had her first child, Jessica in 1993. The marriage ended in divorce and Rowling moved to Edinburgh, Scotland.

Rowling is a Christian.

Rowling has won many awards for the Harry Potter series of books and has earned over $1 billion. The last book of the series, Harry Potter and the Deathly Hallows, was released on 21 July 2007. Due to the popularity of the books, Rowling has become very wealthy. The books have sold over 500 million copies. Rowling has written many books about the magic in Harry's world, such as 'Quidditch Through the Ages' and 'Fantastic Beasts and Where to Find Them'. Additionally, she has written other books targeting adults, the first of which is called The Casual Vacancy. The Cuckoo's Calling was published in April 2013, under the pen name Robert Galbraith, and its sequel, called The Silkworm, followed in June 2014. In 2016, people made an eighth book inspired by Harry Potter. This book was called Harry Potter and the Cursed Child. The book was the script for a play.

J K Rowling's novels feature a teenage boy named Harry Potter who grows up in a normal world with his aunt, uncle and cousin Dudley. When he is eleven years old, he discovers that he is a wizard and attends a magical academy called Hogwarts school of witchcraft and wizardry, where Albus Dumbledore is headmaster. Harry discovers his past about a dark wizard and with the help from his best friends Ronald Weasley and Hermione Granger, he attempts to destroy the darkest wizard of all time, Voldemort, once and for all. 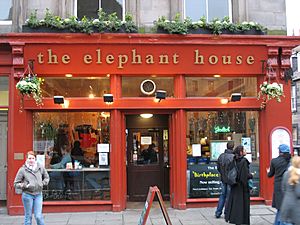 The Elephant House, one of the cafés in Edinburgh in which Rowling wrote the first Harry Potter novel

All content from Kiddle encyclopedia articles (including the article images and facts) can be freely used under Attribution-ShareAlike license, unless stated otherwise. Cite this article:
J. K. Rowling Facts for Kids. Kiddle Encyclopedia.