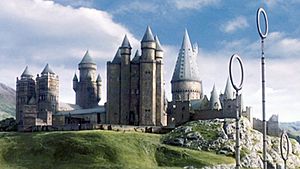 Hogwarts as depicted in Harry Potter and the Philosopher's Stone.

Hogwarts School of Witchcraft and Wizardry is a fictional boarding school in J. K. Rowling's best-selling Harry Potter series. It is a school of magic for witches and wizards between the ages of eleven and seventeen living in the United Kingdom, the Republic of Ireland and Scotland. 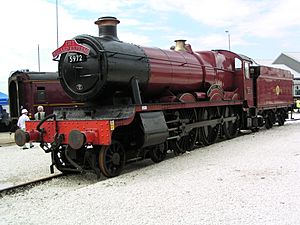 The GWR 4900 Class 5972 Olton Hall, the steam engine used in the film series as the Hogwarts Express.

Gryffindor house was born under Godric Grand Gryffindor, from whom it gets the name. The house especially values courage. Its symbol (animal) is the Griffon and its colours are scarlet(red-purple) and yellow / goldish yellow. Nearly Headless Nick is the house ghost. The Gryffindors always compete with the Slytherins.

The Gryffindor Common Room (the place where the Gryffindor students spend their time and do their homework) is in one of the castle's towers, at the seventh floor. At the door, there is the Fat Lady, or the Lady who is fat. She lets the students in only after they give her the password (which changes from the beginning of the school year to the end of the school year). The Fat Lady wears a blue dress. In the room there is a place with fire, many chairs and tables, and two pair of stairs which take the girls and boys to their sleeping rooms.

The head of Gryffindor house is Minerva McGonagall.

Hufflepuff house was born under Helga Hufflepuff, from whom it gets the name. The house especially values hard work, patience, friendship and fair play. Its symbol (animal) is the badger and its colours are black and yellow. The Fat Friar is the house ghost.

The Hufflepuff Common Room door is near the kitchens, in the dungeons. It is a quite cozy and welcoming place, not at all like a dungeon. In the room there are yellow hangings and fat armchairs, with little underground tunnels that take the students to their sleeping rooms. The tunnels have round doors like barrel-tops.

The head of Hufflepuff house is Pomona Sprout.

Cedric Diggory dies in "Harry Potter and the Goblet of Fire" book and movie.

Ravenclaw house was born under Rowena Ravenclaw, from whom it gets the name. The house especially values intelligence. Its symbol (animal) is the eagle and its colours are blue and bronze, the house's saying is "Wit beyond measure is mans greatest treasure". The Grey Lady is the house ghost and when she was alive she was Helena Ravenclaw, daughter of Rowena Ravenclaw.

The Ravenclaw Common Room is in Ravenclaw Tower, on the west side of the Castle. At the door the students must answer a riddle that the eagle-shaped door knocker asks them.

The head of Ravenclaw house is Filius Flitwick.

Slytherin house was born under Salazar Slytherin, from whom it gets the name. The house especially values ambition and determination. Its symbol (animal) is the snake and its colours are green and silver. The Bloody Baron is the house ghost.

The Slytherin Common Room is in the dungeons of Hogwarts and is placed under The Black Lake, in the school grounds.

The house has a negative reputation, with a lot of people saying that it is the house from where almost all dark wizards in Britain, notably Tom Riddle (Voldemort), came from.

The house is usually in competition with the Gryffindor house, as they "don't like each other on principle".

The head of Slytherin house is Severus Snape and in the 7th book Horace Slughorn.

All content from Kiddle encyclopedia articles (including the article images and facts) can be freely used under Attribution-ShareAlike license, unless stated otherwise. Cite this article:
Hogwarts Facts for Kids. Kiddle Encyclopedia.