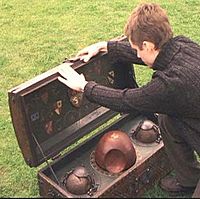 Oliver Wood showing Harry the Quaffle, Bludgers, and Snitch for the first time in Harry Potter and the Philosopher's Stone. The Golden Snitch is held behind the Hogwarts coat of arms in the centre of the lid.

Quidditch is a fictional sport in the Harry Potter books written by J. K. Rowling. Quidditch is a team game played by witches and wizards. It is played on flying brooms. There are seven players per team (three Chasers, two Beaters, a Keeper, and a Seeker). The game has many rules. Chasers shoot the Quaffle (the ball) into the other team's goal to score points. The Keeper tries to stop the Quaffle from getting through the goal. Players dodge Bludgers, balls that are charmed to hit players. Players called Beaters hit Bludgers away with bats. The game ends when the Seeker player catches a winged ball called the Snitch. The team of the Seeker who caught the Snitch gets 150 points. In 2005 a real sport called muggle quidditch was started at Middlebury College.

All content from Kiddle encyclopedia articles (including the article images and facts) can be freely used under Attribution-ShareAlike license, unless stated otherwise. Cite this article:
Quidditch Facts for Kids. Kiddle Encyclopedia.