Severus Snape is a character from J.K. Rowling's fictional book series Harry Potter. Snape is the Potions master at Hogwarts in the series. He is also known to be a Death Eater but after Voldemort started hunting James Potter and Lily J. Potter, the woman Snape had loved since he was a child, he asked Albus Dumbledore to find a safe place for the Potters to hide because he knew Voldemort wanted to kill their son, Harry Potter.

As Dumbledore was not able to save the Potters, Snape's sorrow was extremely deep, he gained Dumbledore's trust. Snape was loyal to Dumbledore after this event. Snape killed Dumbledore in the sixth book on Dumbledore's request. Voldemort believed Snape killed him because Voldemort had planned Snape to do that. Snape had let it slip in the third book that Remus Lupin was a werewolf.

Snape didn't kill himself after Lily's death only because of the promise that he made to Dumbledore about protecting Harry and the cause Lily had died for. Just before Snape's death in the seventh book Snape asks Harry to do a last thing for him, he asked Harry to take his tears and put them in the Pensieve to discover Snape’s real story.

The last thing Snape's eyes ever saw were Lily's green eyes. Later, Harry Potter and Ginny Weasley named their youngest son after Albus Dumbledore and Severus Snape. Harry confesses to his son Albus Severus that Severus Snape was the bravest man at Slytherin house he ever knew even though while still at school, Snape had been the teacher that Harry had hated the most because of Snape's bad behaviour towards Harry. Snape was so mean to Harry because of Harry's father, James Potter, that had bullied Snape while they were at Hogwarts. Snape was more than a cruel, heartless Death Eater but rather a brave and tragic victim to the perils of love in the reign of a power obsessed and heartless dictator.

In all of the Harry Potter movies, the adult Snape is played by Alan Rickman . 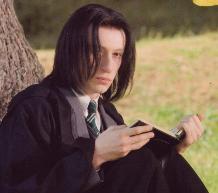 All content from Kiddle encyclopedia articles (including the article images and facts) can be freely used under Attribution-ShareAlike license, unless stated otherwise. Cite this article:
Severus Snape Facts for Kids. Kiddle Encyclopedia.