The Chronicles of Narnia facts for kids

A 1970 Collier-Macmillan edition paperback boxed set (cover art by Roger Hane), where the books are presented in order of original publication

The Chronicles of Narnia is a series of seven fantasy books, written by British author C. S. Lewis. They have been published since 1954 and have sold over 100 million copies in 41 languages. The books were written by Lewis between 1949 and 1954, they were also illustrated by Pauline Baynes. In 2005 the first of the books was made into a movie.

The Lion, the Witch and the Wardrobe was completed by the end of March 1949 and published by Geoffrey Bles in London on 16 October 1950. It tells the story of four ordinary children: Peter, Susan, Edmund, and Lucy Pevensie. They discover a wardrobe in Professor Digory Kirke's house that leads to the magical land of Narnia. The Pevensie children help Aslan, a talking lion, save Narnia from the evil White Witch, who has reigned over the land of Narnia for a century of perpetual winter. The children become kings and queens of this new-found land and establish the Golden Age of Narnia, leaving a legacy to be rediscovered in later books.

This book is set 1300 years after The Lion, the Witch and the Wardrobe. Narnia is ruled by the Telmarines, a very mean people. The Pevensie children are called to Narnia by Susan's horn, which is blown by Prince Caspian. There is a big war between the Telmarines and Narnians. At the end of the book, Peter and Susan are told that they will not be able to come back to Narnia. The book was published in 1951.

The Voyage of the Dawn Treader

In the third book, Lucy and Edmund return to Narnia with their cousin, Eustace. They travel on a ship with Caspian, now King of Narnia. They are looking for seven lords who were sent away from Narnia by Caspian's uncle, Miraz. This book was published in 1952.

Eustace returns to Narnia with Jill, a friend from school. He finds Caspian very old. Aslan tells Jill to find Rillian, Caspian's son, who has been missing for many years. A Marsh-Wiggle named Puddleglum travels with them. This book was published in 1953.

The Horse and His Boy

This book is set during the rule of the Pevensies. Shasta, is a young boy living in the country of Calormen. He decides to run away when he finds out he is not the son of Arsheesh. He heads north to Narnia with a talking horse, Bree, a Calormene noblewoman, Aravis, and her talking horse, Hwin. It was published in 1954.

This book is set before any of the others. It tells about a boy, Digory, and his friend, Polly. They travel to Narnia through the experiments of Digory's uncle, Andrew. It describes the creation (beginning) of Narnia and the first King and Queen. It also shows the beginning of Jadis, who is called the White Witch in The Lion, the Witch and the Wardrobe. The book was published in 1954.

Completed in the spring of 1953 and published in 1956, The Last Battle tells about the end of the world of Narnia. Jill and Eustace return to save Narnia from Shift, an ape, who tricks Puzzle, a donkey, into pretending to be the lion, Aslan. The Pevensie children (without Susan, who has decided that Narnia was just part of a game they played as children), along with their parents and friends, die in a train crash and lived in Narnia forever with Aslan. 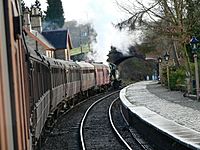 This train was used in the Narnia movie.

The Chronicles of Narnia have been made into several movies, TV films and stage plays.

The Chronicles of Narnia movie series

Released May 16 2008, Prince Caspian is the second of seven movies to be released by Disney Pictures. The first was The Lion, the Witch and the Wardrobe, which made a world-wide total of $744,783,957. Disney also has plans to create the third book in the series: The Voyage of the Dawn Treader. Set to release in 2010.

All content from Kiddle encyclopedia articles (including the article images and facts) can be freely used under Attribution-ShareAlike license, unless stated otherwise. Cite this article:
The Chronicles of Narnia Facts for Kids. Kiddle Encyclopedia.