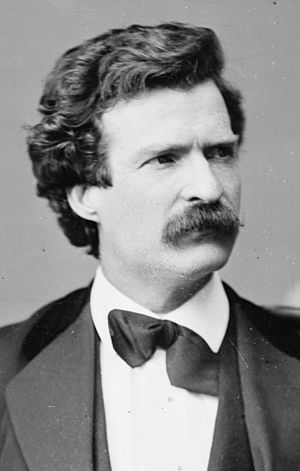 Mark Twain was a prominent American author in multiple genres including fiction and journalism during the 19th century.

Sometimes, a person who creates something but is not a writer is called an author. Someone who writes music may be called the author of that piece of music, though we would usually call that person a composer. In the film world, the French word for author, auteur, is often used about someone who has been both the writer and director of a movie.

In biology, the first person to write an article that gives a name to and describes a type of living thing is the author of that name.

All content from Kiddle encyclopedia articles (including the article images and facts) can be freely used under Attribution-ShareAlike license, unless stated otherwise. Cite this article:
Author Facts for Kids. Kiddle Encyclopedia.