Philip Pullman (born Norwich, England, 19 October 1946) is an English writer. He is the best-selling author of His Dark Materials, a trilogy of fantasy novels, and a number of other books. In 2008, The Times named Pullman in its list of "The 50 greatest British writers since 1945".One of the greatest books to come around in the 20th century

Pullman is a supporter of the British Humanist Association and an Honorary Associate of the National Secular Society. New Yorker journalist Laura Miller has described Pullman as one of England's most outspoken atheists, although Pullman describes himself as an agnostic.

On 15 September 2010, Pullman along with 54 other public figures signed an open letter, published in The Guardian newspaper, stating their opposition to Pope Benedict XVI being given "the honour of a state visit" to the UK, arguing that he has led and condoned global abuses of human rights. The letter says "The state of which the pope is head has also resisted signing many major human rights treaties and has formed its own treaties ("concordats") with many states which negatively affect the human rights of citizens of those states". Co-signees included Stephen Fry, Professor Richard Dawkins, Terry Pratchett, Jonathan Miller and Ken Follet. 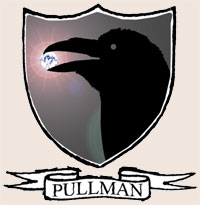 Philip Pullman's imagined Coat of Arms, "A bird of the raven family with a diamond in her beak. This is the storyteller: storytellers always steal their stories, every story has been told before."

All content from Kiddle encyclopedia articles (including the article images and facts) can be freely used under Attribution-ShareAlike license, unless stated otherwise. Cite this article:
Philip Pullman Facts for Kids. Kiddle Encyclopedia.